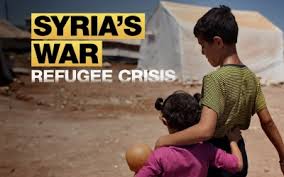 Diplomats ran into repeated hurdles Tuesday in their efforts to convene a peace conference on Syria this year.

President Bashar Assad’s entrenched regime signaled it is not ready to negotiate handing over power, while his main ally Russia insisted, once again, that pro-Assad Iran must be part of any talks.

The diplomatic talks among world powers in Geneva at the U.N.’s elegant Palais des Nations contrasted sharply with the heavy shelling and missile attacks being waged in a civil war that both sides still believe they might win militarily.

With a death count that officially surpassed 100,000 more than three months ago, the United Nations also announced that as many as 40 percent of Syrians now need humanitarian aid.

Adding to the disarray is the disagreement among the world powers over the next diplomatic steps or exactly what any future Syrian leadership beyond the Assad regime should look like.

The Syrian war has left over 9 million citizens in need of humanitarian aid, including 6.5 million people who are now internally displaced, said Jens Laerke, a spokesman for the U.N. Office for the Coordination of Humanitarian Affairs.

“They’re staggering, it’s a disaster, and it continues,” Laerke said.

As he spoke, the U.N.’s top Syria envoy, Lakhdar Brahimi, headed into meetings with senior Russian and U.S. officials to see if a U.N.-sponsored peace conference bringing together Assad’s government and a united opposition delegation could be convened this year.

Brahimi also was meeting with officials from Britain, France, China and four of Syria’s neighbors — Turkey, Lebanon, Jordan and Iraq — that are struggling to cope with the conflict, now in its third year.

The Britain-based Syrian Observatory for Human Rights, which closely monitors the war through activists in the country, puts the current figure at more than 120,000 deaths.

Diplomats are trying to resume negotiations that created the roadmap for a Syrian political transition adopted last year in Geneva by key nations including the five Security Council powers — the U.S., Russia, China, Britain and France.

The plan starts with establishing a transitional governing body with full executive powers agreed to by both sides and ends with elections. But there has been no agreement on how to implement it. One of the sticking points remains Assad’s future role.

Syria’s information minister said the government delegation is not ready to negotiate handing over power.

In an interview with Syrian state TV late Monday, Omran al-Zoubi said Geneva talks are part of a political process “and not a handover of power or forming a transitional governing body.”

Members of the exiled and Western-backed opposition group insist that Assad be excluded from Syria’s future leadership for any talks to take place.

U.S. Secretary of State John Kerry told a news conference in Warsaw, Poland, that the Assad regime knows that the purpose of a second peace conference in Geneva would be to put the roadmap in place.

Russia, meanwhile, said that Iran must take part, reiterating a longtime demand that could make it more difficult to organize the talks. The Syrian opposition has opposed Iran’s involvement.

Russian Foreign Minister Sergei Lavrov on Tuesday rejected a statement by Syrian National Coalition leader Ahmad al-Jarba, who said his coalition wouldn’t attend the talks if Iran is invited, as a “provocation.” He said the conference must be called without any preconditions.

The conflict began as a largely peaceful uprising against Assad’s rule in March 2011 and became an armed conflict after a government crackdown on dissent. Over the past year, the fighting has taken on sectarian overtones, with predominantly Sunni Muslim rebels fighting Assad’s regime that is dominated by Alawites, an offshoot Shiite group.