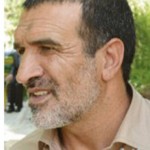 An Iranian commander of the Revolutionary Guards was killed in Syria by “terrorists” while defending “oppressed Syrian people” near Damascus, media reports said Monday.

Iran — a key ally of President Bashar al-Assad’s embattled regime — has repeatedly denied it has troops fighting in Syria.

The Mehr news agency said commander Mohammad Jamali Paqale, a veteran of the Iran-Iraq war in the 1980s, had recently volunteered to defend a Shiite shrine near the Syrian capital.

He was killed “by terrorists while defending” the holy site, it said without giving a date.

The ISNA news agency said Jamali’s funeral was to be held Tuesday in the southern city of Kerman.

Jamali, the Mehr report said, hailed from the same Guards outfit that had trained General Qassem Soleimani — who now heads the elite special operations Quds Force — in his early days.

The Quds Force is accused by Western and Arab governments as well as Syrian opposition groups of orchestrating Iran’s alleged military backing of the Assad regime.

Tehran says it has provided Damascus with material and intelligence support but denies having sent combat troops to aid the regime.

The denial was reiterated by a Guards spokesman Monday.

“As we have repeated many times, Iran does not have any organized battalions in Syria,” said Ramezan Sharif in remarks reported by the Sepahnews website.

Iran “has an advisory presence there for sharing defensive experiences with the country’s defenders,” said Sharif.

The Syrian conflict has killed more than 120,000 people since it broke out in March 2011, according to the Syrian Observatory for Human Rights, a Britain-based group that relies on a network of activists, medics, lawyers and other people on the ground.

Iranian President Hassan Rowhani said late October that part of a solution to the Syria crisis is to expel “terrorist groups” from that country.
Al Arabiya