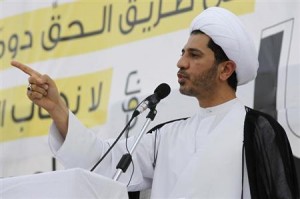 Bahrain police have summoned the head of the main Shi’ite Muslim opposition group al-Wefaq for questioning on Sunday, a source at the interior ministry said on Saturday.

Unrest has dogged Bahrain, a Western ally which hosts the U.S. Fifth Fleet, since the 2011 uprising led by majority Shi’ites demanding reforms and more share in running the kingdom ruled by the Sunni Muslim al-Khalifa dynasty.

The revolt was put down with the help of Saudi intervention but protests later resumed and remain frequent.

The ministry source had no details of what the questioning of Wefaq Secretary General Sheikh Ali Salman was about.

Wefaq’s website confirmed the summons but said the reasons had not been revealed. “It is believed to be part of the political blackmail and revenge against the peaceful opposition that is asking for democracy,” it said in a statement.

The deputy leader of Wefaq, Khalil al-Marzouq, was arrested in September and is now on trial on charges that include inciting terrorism, although has since been freed temporarily until his next hearing on November 18.

His arrest prompted Wefaq to suspend its participation in talks with the government aimed at ending continued Shi’ite opposition protests in the small Gulf Arab island state.

Bahraini authorities also shut and dismantled an exhibition on anti-government protests staged by Wefaq on Wednesday, saying it violated the law and incited hatred.

Talks between the government and its opponents began in February but have failed to resolve the political crisis, with the two sides still mistrustful and apparently far apart on the opposition’s main demand for an elected government.

Wefaq, which says it advocates non-violent methods, demands a constitutional monarchy with a government chosen from within a democratically elected parliament.