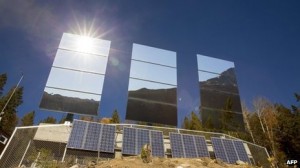 The people of Rjukan in Norway are celebrating the installation of giant mirrors, which have finally brought winter sunshine to their town centre.

Rjukan lies in a deep valley, and during the six months of winter the surrounding mountains cast a shadow over the town even at midday.

About 1,000 people, among them children in sunglasses, cheered when the main square became bathed in sun.

The idea of using mirrors in Rjukan was first proposed 100 years ago.

Rjukan’s inhabitants gathered in the main square on Wednesday for the official inauguration of the mirrors.

Some sipped cocktails on sun loungers, while others played beach volleyball on a makeshift sand court.

As the sun’s reflected rays illuminated the town square, a band played the song Let the Sunshine In, while Rjukan’s townspeople cheered, among them hundreds of children with yellow suns painted on their faces, some waving Norwegian flags.

He said he hoped the mirrors would attract visitors to the region, which up till now has been associated more with the bravery of the men who sabotaged Hitler’s attempt to develop the atomic bomb at a hydroelectric plant near Rjukan.

The problem of how to bring sunshine to Rjukan was first considered a century ago by a Norwegian engineer and industrialist, Sam Eyde, who developed the town to provide workers for the power plant, which lies at the foot of a waterfall.

At the time, the technology did not exist to fulfill his vision to harness the rays of the winter sun.

Instead, a cable car was installed to bring Rjukan’s inhabitants to the top of an adjacent mountain for a fix of winter sun.

Initial opposition
By the beginning of the 21st Century, the giant mirror plan had became a viable option, and the Italian village of Viganella installed a similar sun mirror in 2006.

Rjukan’s mirror project was revived in 2005 by Martin Andersen, an artist and town resident.

Despite some initial opposition to the use of public money, a combination of private sponsorship and public investment eventually drew together the 5m Norwegian krone (£528,000; $851,000) needed to complete the project.

The three mirrors, 17sq m each, were brought in by helicopter and placed on a mountain, about 450m above the centre of the town.

Controlled by computers, the tilted mirrors follow the course of the sun to bring sunshine to Rjukan’s main square below.

Rjukan is a place “where the impossible has become possible” said Mr Bergsland.

Top photo:The three mirrors are controlled by computer and follow the path of the sun