45 killed as bus goes up in flames in India 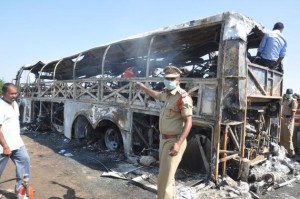 In one of the worst-ever road accidents in the recent past in Andhra Pradesh, 45 people, including an infant, were burnt to death when a luxury bus run by a private travel agency caught fire after hitting a culvert on the Bangalore-Hyderabad national highway here at 4.55 a.m. on Wednesday.

The accident took place when the bus hit the edge of the culvert in the middle of the road while overtaking a car about 135 km from Hyderabad. The force of the collision was such that a railing on the culvert pierced the bus where the diesel tank was fitted, sparking off the fire. Feroze, the driver, stopped the bus ten metres down the road after noticing the vehicle was on fire.

Eyewitnesses said the fire spread toward the cabin while the passengers huddled at the rear with the glass doors locked.

Feroze and the bus cleaner reportedly tried to unlock the doors but in vain. Both of them and five other passengers escaped through the exit near the driver’s seat. Other passengers had no escape route and they were engulfed in flames within minutes.

Except for the frame and seats, the bus was reduced to ashes amidas a huge ball of fire rose to the sky. A small group of villagers tried to douse the flames with buckets of water from a nearby tanker, but to no avail. The victims’ cries had died down by the time.

The vehicle was already destroyed by the time a fire tender from Wanaparthy, 20 km away, reached the spot an hour later.

G. Butchanna, one of the two operators at an adjacent electric sub-station, told The Hindu that no one could approach the bus because of the intense heat. He said there were frequent explosions within the bus throughout the 25 minutes of it burned.

The Volvo bus had left the Majestic bus terminus in Bangalore around 10.30 p.m. with 49 passengers and two crew members. The seats were reserved for only 42 passengers but seven others purchased tickets on the spot.

The bus was scheduled to reach Hyderabad around 7 a.m.

As the passengers boarded the bus after dinner, they slept immediately and did not call up their relatives over cell phones later. The relatives reached the site after the news was broken by TV channels and their calls went unanswered.

The Mahabubnagar district police in Andhra Pradesh have opened a helpline to provide information about the mishap.