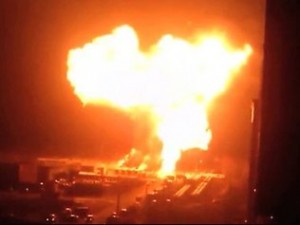 A massive blast has reportedly destroyed a a Syrian air defense base near the coastal city of Latakia with multiple Syrian and Lebanese sources speculating that an Israeli strike from the Mediterranean was to blame.

The Syrian Observatory for Human Rights reported a loud explosion in a Syrian army base, and Twitter users quoted eyewitnesses who said the blast occurred near Snobar Jableh, just south of the city,The Times of Israel reports.

Unconfirmed reports suggested the explosion was the result of a missile strike from the sea. And social media came alight with posts alleging that Israel was responsible.