Attacks on Christians by Islamic militants rise in Egypt 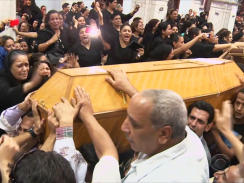 A top leader of the Muslim Brotherhood was arrested Wednesday by the military government. It’s part of the crackdown on the Brotherhood, which advocates a strict Islamic government. Essam El-Erian went into hiding when the military ousted President Mohammed Morsi. Since then, Islamic militants have stepped up attacks on Christians.

In a packed church in a poor Cairo neighborhood, mourners grieved for their dead: Five Christians mowed down by masked gunmen as they arrived for a wedding.

Khalil Masiha lost two of his granddaughters in the attack. Maryam was just 8 years old.

The shooting was the latest in a wave of attacks against Egypt’s Christian minority, which makes up about 10 percent of the country’s population. Christians say they are being targeted by hardliners in the Muslim Brotherhood after they backed the military’s crackdown on the Islamic group.

But since the crackdown, more than 50 churches have been burned or looted. The Church of the Virgin Mary in Al Nazla, a small village a few hours outside of Cairo, was attacked last August when a large crowd burst through the gates and ransacked the compound.

According to guards who were there that night, once the church had been completely looted, the mob began then pelting it with Molotov cocktails until the entire structure was consumed by the flames.

By the time it was safe for caretaker Fawzi Saad to return, there was almost nothing left of the 400-year-old church.

“It was very painful because this is a heritage site,” said Saad, “and it’s very precious to us.”

No one claimed responsibility for the attack, but Saad told us he blames the Muslim Brotherhood.

He said the church had received threats from them before.

When the children ask, ‘Who did this,’ we can’t tell them the truth,” said Saad, “because they will think that all Muslims are capable of this, but, in fact, very few Muslims could do something like this.”

The military has promised that it will rebuild all of the damaged churches, but so far that hasn’t happened. In the meantime, the security situation continues to deteriorate rapidly. The Muslim Brotherhood has come out and condemned the attacks, but what it hasn’t done yet is crack down on the anti-Christian rhetoric that fuels this type of violence.