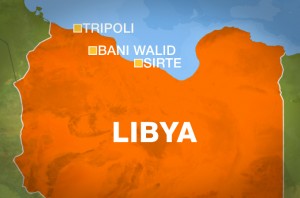 Monday’s report said “10 heavily armed men” had made off with the funds, which were destined for the Sirte branch of the Libyan central bank and had been flown to the city from the capital Tripoli.

Citing a source from the local branch of the central bank, LANA said that the gunmen stole “53 million Libyan dinars ($42 million)” and another $12 million in euros and US dollars.

The gunmen attacked the van on the road between Sirte airport and the town itself, 500km east of Tripoli, LANA said, without saying if there had been any casualties.

Only one security vehicle had been assigned to protect the van, and the agency said the guards “were unable to resist the 10 attackers.”

LANA quoted a security official in the city as saying the vehicles used in the robbery had been identified and that police were hunting the perpetrators.

A city official contacted by the AFP news agency said he had no further details about the robbery but that two Sirte banks had been hit in July, with the robbers making off with $400,000.

Gaddafi freed tens of thousands of convicted criminals in the early days of the 2011 rebellion, many of whom have formed powerful gangs that have taken advantage of a flood of weapons from the former leaders looted arsenal.

Sirte, Gaddafi’s home town and the place where he was captured and killed, has largely been spared the wave of violence that has swept the country since he was toppled.

The government has called on the brigades of ex-rebels that overthrew Gaddafi to lay down their arms or join the security forces, but several militias have ignored its pleas and carved out their own fiefdoms across the vast, mostly-desert country.

In a show of force, armed men earlier this month captured Prime Minister Ali Zeidan and held him for several hours before releasing him. Ten days later the head of an interior ministry anti-crime unit boasted he was behind the “arrest” and that he was “proud” of it.