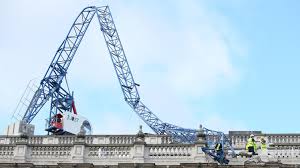 At least seven people died in Germany while there were four deaths in Britain and fatalities in the Netherlands, Denmark and France as the storm brought down trees, blew roofs off houses and turned over trucks, causing chaos across much of the region.

In Germany, falling trees killed several drivers, at least one man drowned and a 66-year-old woman died when a wall collapsed on her, German media reported.

The storm had barrelled in overnight, with gusts of up to 99 mph (160 kph), leaving a trail of damage across parts of southern Britain, before heading eastwards into mainland Europe.

A man and a woman were found dead in west London after several houses were damaged in a suspected gas explosion on a street where the storm blew a tree down. London police said the tree may have damaged gas pipes, causing the explosion.

A crane smashed into the Cabinet Office, a ministry in the heart of London, forcing Deputy Prime Minister Nick Clegg to cancel a news conference.

Thin volumes on London’s financial markets suggested many traders had been stuck at home, along with millions of commuters who would normally head into London but were thwarted by train and Tube lines being shut by toppled trees and power failures.

Passenger Nozipho Mtshede said she was going to miss her father’s funeral in Zimbabwe due to her flight being delayed eight hours: “I won’t make it because they can’t keep him so I’ll have to miss his burial.”

Winds of more than 150 kph swept across the low-lying Netherlands, killing two.

Uprooted trees smashed cars, homes and sank a houseboat on an Amsterdam canal. Roofs were blown off buildings and several houseboats were ripped from their moorings, police said.

A woman died in Amsterdam when a tree fell on her. A 24-year-old man who was struck on the head by a branch while cycling in the central city of Veenendaal died in hospital.

The storm brought trains to a standstill across much of the country, and services had not fully resumed by Monday evening.

In France, a 47-year-old woman was found dead after being swept out to sea during a cliff walk on Belle Ile, an island off France’s northwestern Brittany coast where the high winds generated waves of 5 to 6 metres, local authorities said.

Winds topping 100 kph struck the north and northwest of the country felling trees, whipping up seas and cutting power supplies to around 75,000 homes, according to the ERDF electricity distribution company.

Homes and businesses were counting the cost of the damage as a British Met Office spokeswoman said the worst of the storm in Britain had passed by late morning as it headed east.

Some 486,000 properties in Britain were left without power, UK Power Networks said, in one of the worst storms to hit England since the 1987 “Great Storm”, which killed 18 people and felled around 15 million trees. By mid-afternoon, 115,000 properties were still without power.

The Association of British Insurers said it was too early to give figures on the insured loss. The 1987 storm caused 2.2 billion pounds of damage in today’s terms (1 billion in 1987 money). The last comparable storm to Monday’s was in 2002, a Met Office spokesman said.

Gusts – in places above the 33 meters per second classified as hurricane force – battered Scandinavia from mid-afternoon, closing the bridge between Sweden and Denmark and paralysing road and rail transport.

A Danish man was killed in Gilleleje, north of the capital Copenhagen, by a collapsing wall and a woman was injured when she was trapped under a fallen roof in the province of Jutland.

As evening fell there were no reports of injuries in Sweden but widespread reports of damage with roofs blown off buildings and trees and overturned trucks blocking roads.

A ferry ran aground off Karlskrona on southwest coast, but the Swedish Maritime Administrations said the 33-man crew were not in danger.

Photo:Engineers look at the damage as a crane working on redevelopment at the Cabinet Office in Whitehall, near to Downing Street in London, was brought down by high winds, Monday, Oct. 28, 2013. A major storm with hurricane-force gusts is lashing southern Britain, parts of France and Netherlands, causing flooding and travel delays with the cancellation of many flights and trains. Weather forecasters say it is one of the worst storms to hit Britain in years. (AP Photo/Alastair Grant)