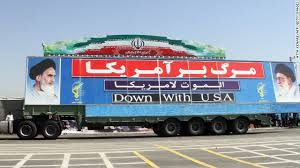 A new, anti-American billboard campaign in Tehran didn’t last for long: Iranian officials removed at least some of the posters days after they went up, right before the anniversary of the U.S. Embassy takeover in Tehran. Iran says that the posters were taken down because they went up without permission around the city, but the move was seen by many as a pushback against the country’s conservative hardliners.

Here’s one of the posters in question. It depicts an American official, bedecked in symbols of negative American perception from the waist down, like military fatigues or an attack dog. The American is posed sitting across from an unnamed Iranian official bearing a resemblance to Mohammad Javad Zarif, Iran’s foreign minister:

Some of the campaign posters were reportedly replaced with a more peaceful message, reading “in a world that is filled with oppression, we don’t oppress, nor do we allow oppression:” 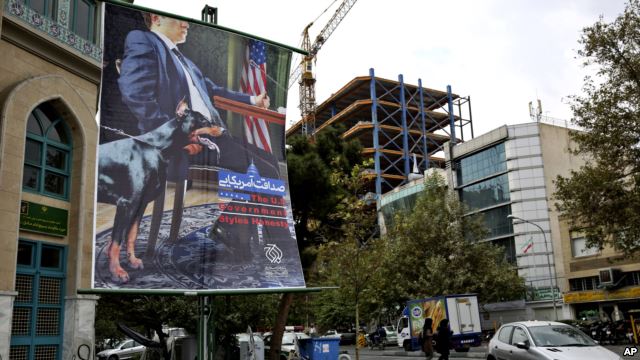 The move prompted criticism from hardliners in the country, many of whom already aren’t exactly happy with moderate president Hassan Rouhani’s new charm offensive (and actual, “serious” talks) with the west over the country’s nuclear program. After Rouhani had a historic (if brief) phone call with President Obama after the UN General Assembly in September, the president returned to mixed signals from the Iranian public. The posters were distributed around Tehran by the Owj Cultural Organisation, whose leader Ehsan Mohammad-Hassani claimed to Reuters on Sunday that the group had permission from Tehran officials for the campaign, which wasn’t intended as a direct rebuke of Iran’s policies, despite its pretty specific visual references to the current nuclear negotiations.

Meanwhile, a handful of conservative Iranian news agencies have provided another public outlet for anti-American sentiment in the country: the “First Major International Award of ‘Down with America'” photo, video and essay contest. Encouraged topics include “US & Self-conceit,” “US & Oppression,” “US & Islamophobia,” and “US & Neocolonialism.” First prize: 2,500 euros.