Britain being slammed by one of worst storms in years 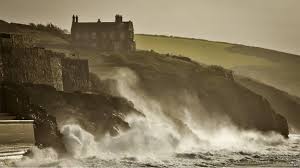 Driving rains and high winds lashed the U.K. on Sunday evening, as officials warned that the storm forecasters are calling one of the worst in years will cause widespread disruptions for early morning commuters.

Officials said a 14-year-old boy is feared dead after being swept out to sea while apparently playing in the surf in southern England. Coastguard and police rescuers searched late Sunday for the boy in high seas with poor visibility, but after several hours the Maritime and Coastguard Agency said it had turned into a search and recovery operation.

Sussex Police urged people to stay clear of the seashore until the storm — dubbed St. Jude and #Stormageddon on social networks — abates.

With winds expected to pick up through the night and into the early hours of Monday, railways and airports canceled many services pre-emptively amid warnings over treacherous road conditions and the risks of debris from falling trees and flooding.

Prime Minister David Cameron told government agencies to ensure that contingency plans were in place for transportation, schools and power supplies during the storm, which could have gusts stronger than 80 mph – akin to those in hurricanes.

Britain does not get hurricanes due to its geographic location.

A regular National Football League game in London between the San Francisco 49ers and Jacksonville Jaguars at Wembley Stadium on Sunday evening went on as planned, but elsewhere contingency planning and cancellations were put into effect.

Heathrow Airport canceled at least 60 flights ahead of the storm’s arrival in full force, warning travelers to be prepared for disruptions. Rail networks canceled many trains preemptively up through Monday morning, citing the high risk of trees and other debris expected to fall on train lines.

Eurostar said it would not be able to run any cross-Channel rail services until 7 a.m. on Monday to allow for train lines to be inspected.

Martin Young, the Met Office’s chief forecaster, said that while the storm is “major” for the U.K., its winds are not expected to be as strong as those seen in the “Great Storm of 1987,” which saw gusts of 115 mph and left 18 people dead.

The storm is expected to move across the country and head out over the North Sea by Monday afternoon.

Once the so-called St. Jude storm – named after the patron saint of lost causes – passes through Britain, it is expected to hit parts of the Nordic countries on Monday afternoon.

The Danish Meteorological Institute issued a warning, saying winds of hurricane-strength are expected in some parts of Denmark and heightened water levels in western Jutland near the town Esbjerg.

The Swedish Meteorological and Hydrological Institute also issued a warning, saying it expects hurricane-strength winds to hit southern and western Sweden on Monday evening, potentially causing damage and travel disruptions. It said the stormy weather is expected to subside as it moves north on Tuesday and Wednesday.

Photo: Waves crash onto the cliffs surrounding Porthleven, Cornwall, southwest England, Sunday, Oct. 27, 2013. A severe storm hit the southern half of Britain later Sunday, bringing heavy rains and gusts of 60 to 80 miles per hour with the potential to cause widespread and severe disruption from falling trees, power cuts and flooding. / BEN BIRCHAL,AP PHOTO/PA