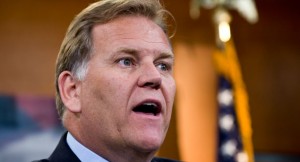 Republican lawmakers urged President Barack Obama on Sunday to repair US ties with Saudi Arabia, after the critical Gulf ally protested against Washington’s policy on Syria and Iran.

House Intelligence Committee Chairman Mike Rogers said the rift with Riyadh has been developing over the past two years, pointing to a 2011 US decision to keep the Syrian conflict at bay and the “quick rush to the sweet talk” from Iran on its suspect nuclear program in recent months.

“Those are critical issues to the Saudis, to the Qataris, to the Jordanians and to others in the Arab League that I think rattled their faith in the administration’s ability to protect them in a very dangerous world,” Rogers told CNN’s “State of the Union.”

The Wall Street Journal reported this week that Saudi intelligence chief Prince Bandar Bin Sultan al-Saud told European diplomats he would scale back Saudi Arabia’s cooperation with the CIA to train Syrian rebels, and work with other allies, including Jordan and France.

Riyadh has also rejected a prized seat as a non-permanent member of the United Nations Security Council, in protest at the world body’s failure to do more to end the Syrian war.

Bandar was cited as saying that the decision was a “message for the US, not the UN.”

“So what you see is that friction starting to take hold and we have to repair this and repair it soon,” Rogers said.

“They’re going to find other friends. I argue that’s not good for the United States.”

Separately, Republican Senators John McCain and Lindsey Graham lashed out at Obama’s “abdication of a leadership role” in the Middle East, saying he was “failing” US interests in the troubled region.

“The United States is experiencing a serious failure of policy and loss of credibility in the Middle East,” they wrote in an op-ed in The Washington Post.

“Events in the region are headed in a perilous direction, and there is little reason to feel confident that the Obama administration has a strategy to secure US interests and values in this vitally important part of the world.”

Turning to Syria’s bloody civil war, estimated to have killed more than 115,000 people since March 2011, the two lawmakers said they had seen “no indication” that Obama had honored his commitment to reduce President Bashar al-Assad’s military capabilities, aid the opposition and help negotiate an end to the regime.

“Consequently, any hope of ending this conflict through a negotiation in Geneva next month has little to no chance of success,” added Graham and McCain, who lost the 2008 presidential election to Obama.

Worried that Washington’s ties with Riyadh were “deteriorating rapidly” the two Republican colleagues also urged the Obama administration to be cautious in its dealings with Iran.

“We should be prepared to suspend the implementation of new sanctions, but only if Iran suspends its enrichment activities. We should not accept that the centrifuges spin while the diplomats talk,” they said.