Cheney: Military action against Iran may be inevitable 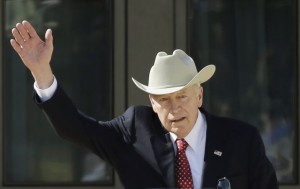 The Obama administration is optimistic that Iran’s new leadership could offer an opportunity to repair diplomatic relations with the United States and to permanently halt Iran’s nuclear ambitions.

But former Vice President Dick Cheney believes that, eventually, America may have to resort to military force.

In an interview on ABC’s “This Week” on Sunday, Mr. Cheney was asked whether a strike on Iran is “inevitable.”

“I have trouble seeing how we’re going to achieve our objective short of that,” he said. “And I doubt very much that the diplomacy will be effective if there’s not the prospect that, if diplomacy fails, that we will, in fact, resort to military force.”

Since new Iranian President Hassan Rouhani came to power, the White House has begun an all-out effort to cool tensions between the nations.

Administration officials, for example, recently suggested it may be time to ease economic sanctions on Iran with the ultimate goal of a diplomatic solution to end that nation’s nuclear program.

“I don’t have a lot of confidence in the administration to be able to negotiate an agreement,” he said. “I’ve talked to my friends in that part of the region. I still know them, a lot of them, and they’re very fearful that the whole Iranian exercise is going to go the same way as the Syrian exercise. That is, that there will be bold talk from the administration. But in the final analysis, nothing effective will be done about the Iranian [nuclear] program.”