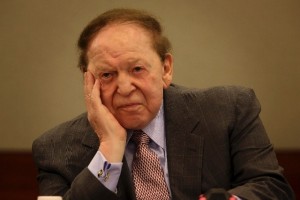 The biggest donor to Republican Party political groups said Tuesday that the United States should drop a nuclear bomb on Iran to spur the country to end its own nuclear program.

Sheldon Anderson, the billionaire casino mogul, said on a panel at Yeshiva University in New York City that an initial blast, targeted to hit only desert area, would kill “maybe a couple of rattlesnakes, and scorpions, or whatever,” according to video posted on the foreign policy news website Mondoweiss.

“Then you say, ‘See! The next one is in the middle of Tehran. So, we mean business. You want to be wiped out? Go ahead and take a tough position and continue with your nuclear development.”

“It’s the only thing they understand,” Adelson said.

“And do you see the current negotiations as a sign of weakness?” Moderator Rabbi Shmuley Boteach asked.

He criticized the Obama administration’s willingness to engage the Iranians diplomatically.
” It’s the worst negotiating tactic I could ever imagine, my entire life,” Adelson said.

“Because you can’t get anything. He’s not saying to them, Roll back your entire program and show that you’re willing to be peaceful. So, roll it all back… and we’ll roll back the sanctions…. What is that, a game of chicken, who’s going to blink first?”, He asked.

Adelson, a staunch Israel supporter, gave a whopping $92.8 million, along with his wife Miriam, to outside political groups during the 2012 election cycle, according to the Center for Responsive Politics, which tracks political spending. He was a major backer of a super PAC that kept Newt Gingrich’s campaign aflat.

An audience member at the panel, titled “Will Jews Exist,” filmed Adelson’s comments. Click to Watch