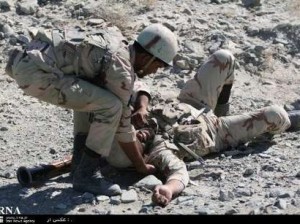 About 20 Iranian border guards were killed in clashes with “bandits” on the southeastern frontier with Pakistan overnight and several others were seized, Iranian media said on Saturday.

The reports gave no more details on the identity of the armed group but security forces have fought drug traffickers before in the border region with Pakistan and Afghanistan.

The area also has a history of unrest, with the mainly Sunni Muslim population complaining of discrimination at the hands of Iran’s Shi’ite Muslim authorities.

An Iranian prosecutor also announced that authorities had executed 16 “terrorists” in the same province on Saturday in retaliation for the killings.

State news agency IRNA quoted an unnamed official saying the fighting took place in southeast Sistan-Baluchistan province but the exact number of dead had not been confirmed. Different news reports quoted the number of border guards killed at 17 or 18.

Rajab-Ali Sheikhzadeh, a provincial official, told the ISNA news agency that “bandits and hostile groups” had clashed with Iranian security forces on Friday.

“The attackers, who saw that conditions were unsafe for their actions, retreated to the country opposite (the border) after the clash,” Sheikhzadeh said, according to ISNA.

The site of the attack is near the Pakistani border.

A deputy governor of Saravan, the town near where the clashes occurred, told state television that six border guards were captured by the attackers.

In response, 16 people said to be elements of “terrorist” groups were executed, said Mohammad Marzieh, the public prosecutor of provincial capital Zahedan.

“These individuals were executed this Saturday morning in response to the terrorist action of last evening at Saravan and the martyrdom of the border guards,” he said, quoted by ISNA.

He gave no details of any trial proceedings.