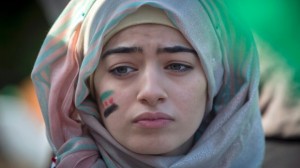 Syrian authorities have released a total of 61 women detainees, an activist group said Thursday, the latest in a three-way prisoner exchange that was one of the more ambitious negotiated deals in the country’s civil war in which rival factions remain largely opposed to any bartered peace.

Meanwhile, electricity returned to parts of Damascus, hours after a power cut plunged the capital and other parts of the country into darkness.

The Britain-based Syrian Observatory for Human Rights said Thursday the government of President Bashar Assad had freed the women over the past two days. There was no immediate comment from Syrian officials, nor details on who the women are or their current location.

Lebanese officials have said a third part of the deal called for the Syrian government to free a number of women detainees to meet the rebels’ demands.

The involvement of Lebanon, Syria, Turkey, Qatar and the Palestinian Authority in the deal showed the extent to which the Syrian crisis, now in its third year, has washed across the wider region.

Syria’s crisis began in March 2011 with largely peaceful protests against Assad, and slowly turned into an insurgency and then a full-blown civil war. More than 100,000 people have been killed in the conflict, while another 2 million have sought refuge from the violence abroad.

In Damascus, power was gradually returning to at least parts of the city by early Thursday, after a blackout swept across the capital and other parts of the country late the previous day.

One Damascus resident said that electricity had been restored to his neighborhood after a three-hour cut. He spoke on condition of anonymity because of security concerns.

Syria’s state news agency quoted Electricity Minister Imad Khamis as saying authorities plan to have power back online to all areas within 48 hours. The government has blamed the outage on a rebel attack that it says damaged a gas pipeline that supplies fuel to power stations in southern Syria.

It was not clear how extensive the latest blackout was. Damascus and southern Syria have been struck by several major power outages over the course of the country’s civil war. Many rebel-held parts of the country have been without power for months.