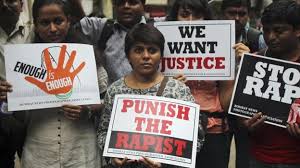 A girl believed to be 13 was gang raped by three men in her village in India and burned alive, according to various news reports.

She later died at a hospital after receiving burns over 80% of her body, the Times of India reports.

The girl was from a village in the northern state of Uttar Pradesh, the Daily Mail reports.

The IB Times reports she was in the eighth grade.

The girl had gone to a farm with her older sister and as they returned, three villagers dragged her away and gang raped her, the Times reports the girl’s family told police. One of the villagers was a local “goon” named Ram Bahadur, according to the Times.

The girl told the alleged assailants she would tell other villagers, at which point, they set her on fire, the news organization reports.

The girl’s older sister ran off to get help, but by the time the girl’s family and neighbors arrived at the spot, she had suffered massive burns.

Police are now in search of the suspects, the Times reports.

Last year, a 23-year-old woman was brutally gang raped in New Delhi and thrown from a moving bus, later dying from her injuries. Six others on the bus, including the driver, raped her. Five of the defendants were convicted and one died in custody.

Similar cases are emerging around India and drawing attention to the issue of safety for women and girls there. In one case, the parents of a 4-year-old girl said a distant relative raped the child. Police said the girl had been tortured and assaulted.