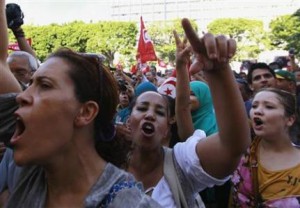 Seven Tunisian policemen were killed in clashes with militants on Wednesday as the government cracked down on Islamist fighters using the chaos in neighboring Libya to get weapons and training.

The violence, some of the worst since Tunisia’s 2011 uprising, unsettled the start of negotiations between the Islamist-led government and opposition to end a crisis over the country’s transition to democracy.

Authorities did not identify the militants involved in fighting south and north of the capital Tunis, but two months ago, Tunisia banned Ansar al-Sharia, a hardline Islamist movement officials blamed for killing two opposition leaders this year.

The Interior Ministry said a gun battle broke out after police raided a house where suspected militants were hiding in Sidi Bouzid, 260 km (161 miles) south of Tunis. Police said they found arms, explosives and a car bomb being prepared.

“They were carrying out a raid, and the terrorists opened fire on them. We have six security forces dead and four wounded and one gunman dead,” Mohammed Ali Aroui, spokesman for the interior ministry, told state television.

Another policeman was killed in a separate clash with militants in Menzal Bourguiba to the north of Tunis, the interior ministry said.

Islamist violence is less common in Tunisia than in some other North African countries, where al Qaeda-linked groups have a stronger presence. But hardline militants have grown in influence since the 2011 Arab uprisings.

Security forces at the weekend killed 10 militants blamed for attacking Tunisian police patrols in a remote area near the Algerian border and killing two officers.

Ansar al-Sharia is just one of the hardline Islamist groups based in North Africa. Its leader is a former al Qaeda fighter in Afghanistan who is accused of inciting his followers to attack the U.S. Embassy compound in Tunis a year ago.

Prime Minister Ali Larayedh told Reuters last week militants exploited anarchy in Libya to get training and weapons across the porous border. Libya is struggling to contain rival militias and Islamist fighters who control parts of the country.

Under pressure from mass protests, and mindful of the army’s ouster of the Islamist president in Egypt, Ennahda has agreed to step down, and talks with the opposition on a political transition had been due to begin on Wednesday. But those negotiations were delayed until Friday.

Larayedh on Wednesday confirmed Ennahda was ready to resign, but insisted on the completion of the country’s new constitution, the establishment of an electoral commission and a clear election date before handing over power.

Those declarations and the militant attacks appeared to upset opposition leaders who want the government to be clearer about its decision to resign.

“Talks start on Friday. We are looking for clarifications from the prime minister. Terrorism attacks have made the atmosphere tense,” said Hussein Abassi, leader of Tunisia’s powerful UGTT union that mediates between the two sides.

The three weeks of talks are meant to choose members of the transition government, decide on a new electoral commission and set a timetable for presidential and parliamentary elections.

But opposition activists doubt Ennahda’s intentions. Thousands of opposition supporters packed the capital’s central Avenue Habib-Bourguiba earlier on Wednesday to demand the government live up to the agreement to step aside.

“There is no trust that this government will go,” said Saloua Faza, a teacher carrying a large Tunisian flag marching in Tunis. “They have never shown us any good faith.”

Ennahda won 40 percent support in Tunisia’s first post-revolt election for an assembly to draft a new constitution, and it formed an interim coalition government with two secular parties.

Its popularity has fallen during its period in power, but Ennahda remains the best organized movement in Tunisia. It faces several leftist and secular groups, as well as Nida Tounes, a party that includes figures from the previous regime.

Photo: Protesters shout slogans during a demonstration to call for the departure of the Islamist-led ruling coalition in Avenue Habib-Bourguiba in central Tunis October 23, 2013. REUTERS/Anis Mili