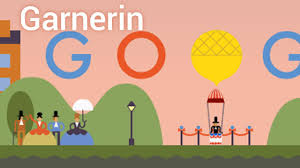 Back on Oct. 22, 1797, a Frenchman called Andrew Garnerin became the first person known to jump with a parachute. Wouldn’t he be proud to know his legacy is memorialized, 216 years later, by a keyboard-powered interactive Doodle from the world’s largest search engine?

OK, there are about 15 words in there that Garnerin wouldn’t even be able to comprehend, but why fight it? The two-key game is beautiful, if not quite as addictive as that darn piñata.

And about old Garnerin, here’s a helpful article that tells you all you need to know: His first drop was from 3,000 feet, after he was brought aloft by hydrogen balloon; he may have vomited all over the crowd below; his record jump height was around 8,000 feet; and he never once plummeted to his death, though his daredevil hobby did bring about his untimely demise — he was killed in a workshop mishap. There, feel smarter now?