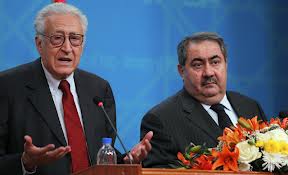 Baghdad: UN-Arab League envoy Lakhdar Brahimi was in Baghdad on Monday on the next leg of a regional tour to build support for talks aimed at ending Syria’s civil war, the foreign ministry said.

Brahimi met with Arab League chief Nabeel Al Arabi in Cairo on Sunday, and was also due to visit Iran, Qatar and Turkey and possibly Syria during his regional tour.

The renewed push for peace talks comes after a rare US-Russian accord compelled Syria to agree to destroy its chemical arsenal, but much of the opposition panned the deal because it averted punitive US strikes on the regime.

The main National Coalition opposition bloc said members will decide in the coming days whether to attend next month’s expected peace talks in Geneva, while the Syrian National Council, a key coalition member, has threatened to quit if they do.

Iraq has sought to publicly avoid taking sides in the civil war between Syrian President Bashar Al Assad’s regime and rebels seeking to topple it, but the conflict has spilled over the border on several occasions.

The US has repeatedly called on Iraq to stop flights allegedly carrying arms from Iran to the Syrian regime. Iraq insists Iran has reduced the number of flights transporting arms to Syria but said Baghdad cannot stop them completely.