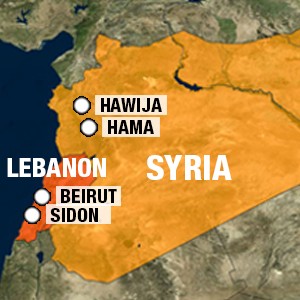 SIDON, Lebanon – Before war engulfed Syria, Hawija was a village of several thousand, a string of low-slung houses stretched across the fields of the Orontes River Basin nearly 200 miles north of Damascus. Across the fields to the west, the Nusayriyah Mountains are silhouetted against the sky. The ruins of the colonnaded streets of Apamea, an ancient city founded by the Seleucids and later taken over by the Romans, are a few minutes’ drive to the south.

The residents of Hawija made their money by growing tobacco and cotton and selling it to the government. It was not a luxurious life, but they embraced the simplicity of rural living and cherished the surrounding natural beauty.

“Before the revolution, it was like heaven,” said Dheina Awayyad, a farmer from the village who is now a refugee in Lebanon. “In the countryside of Hama, we are a society of farmers. We did not care about the president or who will lead Syria, we only cared about God and our farms.”

Today, he lives in the shell of an unfinished four-story building with hundreds of other refugees in the Lebanese seaside city of Sidon. Quarters are tight, with rooms divided by tarps and thin sheets of plywood.

Gaps in the wall meant for windows are covered with wood and sheets of plastic. Sewage flows into open spaces on the ground floor and drips into the unused, trash-filled basement. At night, the hallways are pitch black.

Around 850 refugees – almost all of them from Hawija – have settled down in the unfinished building Awayyad lives in. As violence in Hawija mounted and the death toll climbed, residents effectively transplanted their close-knit village from the rural expanses of Syria’s farm belt to the dark, cramped halls of this urban slum.

For all that has been lost, fractured and dispersed by the war in Syria, Hawija – as a community – has survived, though in a much different incarnation.

At one point in time, the complex was meant to be the Imam Ouzai University for Islamic Studies, an $8 million project according to local media reports from a decade ago. The structure is in a good part of town, overlooking the Mediterranean Sea and tucked between a new hospital and a private high school.The refugees say that Hawija was the first town in the Hama governorate to hold protests after the uprising began in the southern city of Daraa in March 2011. While refugees speak with nostalgia about how idyllic Hawija was, many were also upset with the government, particularly about corruption surrounding the tobacco business that so many were involved in.

At first, security forces stood back and did not open fire as the residents marched through the village calling for the fall of the regime of Bashar al-Assad. As protests spread across the country in coming weeks, security forces stationed in Hawija became edgy and began firing on the crowds.

The countryside to the west of Hama is fairly mixed regarding sects, with Sunni villages, like Hawija, next to Alawite ones. The nearest Alawite village, Jayyid, is just a few kilometers due west of Hawija across farmland and the Orontes River.

“They were like brothers,” before the war said Khaled, a 31-year-old history teacher from Hawija.

He said in early days of the conflict, Alawite friends would drive across the fields to Hawija to pick up those wounded in the protests and smuggle them to hospitals in areas under regime control.

As the conflict graduated from street protests to war as more defecting soldiers joined the Free Syrian Army in the latter half of 2011, Hawija found itself in greater danger. Government forces moved artillery and troops into Alawite villages nearby, perceiving the coreligionists of the president to be natural allies. Soon, shells and rockets began falling on Hawija. The Sunni residents of the town no longer saw their Alawite friends or acquaintances as war captured the valley.

As the conflict continued, the government bombed the town with MiG fighter jets and with barrel bombs – improvised bombs usually made from oil drums and packed with TNT and other explosives – dropped from helicopters.

Residents with cars would load up their vehicles with food, blankets and mattresses and rush to drive away from the town to camp out the strikes. Others went to the school, hoping that the building would be safe. Few in Hawija had basements to shelter in – residents say that the fertile farmland also meant that the earth was too muddy to dig down into.

As violence worsened, some farmers stayed on, hoping to gather a last harvest. But many started to flee to either Turkey or Lebanon.

“It was like a ghost city, most people left,” said Khaled, the history teacher.

Like many refugees, Khaled did not want his full identity to be disclosed out of fear for retribution against family still in Syria. Many refugees from the area have relatives involved with the opposition.

“It was miserable, there was no food, no water, no electricity,” said Khaled of the building’s state when he moved in about a year ago.

Eventually, non-governmental organizations found out about the complex and began to help. Local and international NGOs arranged for refugees to continue work on the building, paying men living there to create partitions and begin work on upper floors.

Today, construction continues, but life is more organized than it once was. Communal bathrooms are located on each floor. A former Hawija shopkeeper opened a small store on the courtyard. A barber comes to the complex to give haircuts occasionally. The informal leader of the refugees, a farmer who goes by Abu Ahmed, calls the faithful to prayer every day in the unfinished mosque beside the building.

More than half the refugees here are children. None go to school these days. Instead, many work or spend their days running around the complex playing.

On a recent afternoon, kids played on improvised seesaws: Planks of wood balanced over breezeblocks on the edge of a puddle of rancid sewage.

“I feel guilt,” said Khaled, the history teacher. He said he wants to help them, but there is no infrastructure to teach them. Not to mention he must work construction when he can to feed his own family.

“It is more difficult than dying,” said Amni, another teacher from Hawija, about how she felt watching her former students live without an education. “My children know how to read and write, but others do not know how to carry a pen.”

“He always had top marks but now that he left the school he does not have any education,” said Abu Mohammed.

By the latest count, there are nearly 800,000 refugees registered or awaiting registration with the United Nations in Lebanon. The actual number of refugees is likely well over one million. Their presence has put a huge strain on Lebanon, a country of just four million that is already reeling from political and sectarian tensions resulting from Syria’s war.

The refugee influx has resulted in hostility. “Some of them (the Lebanese) are very respectful. Others told us we are a virus,” said Awayyad, the farmer. “Lebanese people, when they come here, they do not drink coffee or tea. They wash their hands after they shake hands with

Refugees described an evening in mid-September when gunmen showed up to the compound after an altercation with a man overseeing construction at the building. They said the man demanded that refugees working on upper floors work a double shift. They refused. That night, a car with four gunmen arrived. They sprayed the complex with gunfire from automatic rifles.

Several were injured from bullets hitting the ground and walls near them. As Awayyad talked, he fidgeted with a piece of shrapnel caught underneath the skin of his leg that he said was from that night. One of his friends showed off the spot where a small piece of shrapnel passed through his arm.

Refugees rarely leave the complex unless they have work, saying they are harassed by local residents. Refugees say that Lebanese see the complex as a hotbed of prostitution, drug dealing and armed activity.

“I wish I was a drug dealer,” said Abu Mohammed, the refugee whose son works making coal. “If I cannot buy bread, how can I work in drugs?”

Few feel welcome in Lebanon. Some talk of trying to get to refugee camps in Turkey or internally displaced persons camps in rebel-held territory in northern Syria. All want to go home.

“I will be running, as soon as possible,” if it is safe to go back said Abu Ahmed, the village leader. “You will see no one here in this compound.”
Al Jazeera