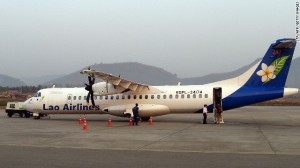 Lao Airlines is investigating that possibility that a plane crash that killed 49 people Wednesday was caused by “wind shear,” an airline official said.

Wind shear — a sudden change in wind speed or direction over a short distance — has been a factor in many air disasters.

Chalerm Taiyalad, a Lao Airlines vice-president, said it was raining heavily at the time Flight QV301 was approaching for landing at Pakse Airport, near the Thai border, after departing from the capital Vientiane.

Gusts from the remnants of Typhoon Nari appeared to have caused the pilots to lose control of the ATR 72 aircraft, he said.

The ATR 72 propeller plane was preparing to land when a gust of wind appeared to push it away from the airport, and it crashed on or near an island in the Mekong River, reported KPL, the national news agency.

Forty-nine people — 44 passengers and 5 crew — were killed in the crash. They included 16 Laotian passengers and five crew, seven French, six Australians, five Thais, three Koreans, two Vietnamese, an American, a Canadian, a Chinese, a Malaysian and one Taiwanese, Taiyalad said.

He said five bodies had been recovered from the Mekong River, while the black box and the remains of the aircraft remained unaccounted for, along with the remaining 44 bodies. Families of the victims were arriving in Pakse, awaiting the recovery of their relatives.

Somphone Doungdara, CEO of Lao Airlines, said his company was working with authorities and investigators from the aircraft manufacturer to determine the cause of the crash. “Our thoughts and prayers are with the families affected by this terrible tragedy,” he said.