Obama to meet with Iraqi PM at the White House Nov.1 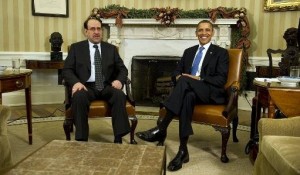 The meeting comes amid a rising spiral in sectarian violence in Iraq inflamed by the civil war in neighboring Syria.

The violence has killed more than 6,000 people in Iraq this year.