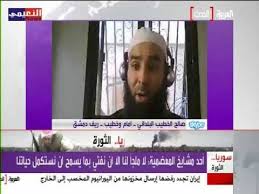 An imam in a rebel-held district of Damascus has issued a fatwa allowing residents to eat cats and dogs, in a desperate bid to ward off starvation after months under siege by the Assad regime.

Saleh al-Khatib ( الشيخ صالح الخطيب) , the cleric who issued the edict, said he had been left with no choice but to lift the usual restrictions under Islamic law, after government forces and pro-regime militias choked off food and medical supplies to three rebel-held suburbs of Damascus and to a camp housing Palestinian refugees.

Tens of thousands of civilians remain trapped in these areas, some of them living under siege for more than a year. Residents have told The Telegraph that as food has run out, they have been forced in recent weeks to survive on stray dogs, rotting animal carcasses, tree leaves and weeds.

“I have watched the poorer families eat stray dogs because they have nothing else,” said Ehab, a resident of the Yarmouk camp, speaking to The Telegraph via Skype. “There is no food here now.”

Shops in the camps were “completely bare” and the tight siege was preventing any movement in or out of the camp, Ehab said. The only prioper food remaining was small quantities of rice.

Their appearance during the festival of Eid al-Adha, when Muslims would normally visit relatives and friends and celebrate with bountiful food, was in stark contrast with the starving rebel areas, where some residents interviewed by The Telegraph broke down and begged for help.

“Please, this is an SOS,” said one activist who asked not to be named. “Today I have eaten nothing. Yesterday I had a small bowl of rice. We are down to one small meal per day.”

Over the last 10 months Syrian government troops have been steadily reducing the amount of supplies allowed into these areas.

Mohammed and Alaa, two residents of Yarmouk, told The Telegraph that initially women and elderly men had been allowed out of the camp to shop for supplies.

“Women were allowed to bring in a small amount of bread, no more than 12 pieces each,” said Mohammed. “Then, in February, this stopped and soldiers only allowed in essentials – grain and sugar – in tiny quantities. Now even that has finished.”

Ehab said: “This has been so bad for five months. There is no food. We had five roads out of here but the regime closed them with sniper and tanks.”

The situation is causing chronic malnutrition that residents say has already resulted in the deaths of a number of babies, a claim that cannot be independently verified.

“Mothers are so malnourished that they cannot produce any milk, and there is almost no baby formula left,” said Omar speaking from the southern suburb of Darayya.

Abu Mohammed, a doctor in a field clinic in the Marj area, east of the capital, said: “On any given day in the emergency room, some four out of 10 patients I see are malnourished children. Many children have very low blood pressure, fatigue, dizziness, and a reduced (disease-fighting) white blood cell count.”

For some, relief came earlier this week when the International Committee of the Red Cross and the Syrian Red Crescent evacuated an estimated 3,500 people from Moadimayet al-Sham, with the agreement of the authorities. But only children, women and old men were able to leave, with the wounded left behind and aid workers prevented from entering to assist them.

“There are many more, including children, who remain in the town,” said Magne Barth, head of the ICRC delegation in Syria.

Omar said that “more than 10,000 people” were still trapped in Darayya alone. “Today the regime started blocking people from coming out again.”