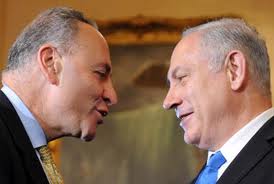 The Obama administration is facing an unexpected hurdle in its new nuclear talks with Iran – a sizeable bloc of Democratic lawmakers who have made clear that they would break with the White House and fight any effort to lift the current sanctions on Tehran.

The future of those sanctions is a key issue in this week’s negotiations in Geneva between senior officials from Iran and the U.S., the most serious talks between the two longtime adversaries in decades. Iranian Foreign Minister Mohamad Javad Zarif kicked off Monday’s session with a PowerPoint presentation, delivered in English, which offered to put new limits on his country’s nuclear program in exchange for easing the Western sanctions that have devastated the Iranian economy and decimated the value of its currency.

The White House has already signaled a potential openness to that kind of deal, but a wide array of powerful Democrats — including the top members of both the Senate and House foreign affairs committees — strongly oppose lifting any of the existing sanctions on Iran unless Tehran offers concessions that go far beyond anything Zarif has talked about in Geneva. The American Israel Public Affairs Committee, one of the most powerful lobbies in Washington, has also promised to do everything in its power to keep the punitive measures in place.

“If the president were to ask for a lifting of existing sanctions it would be extremely difficult in the House and Senate to support that,” Rep. Steve Israel (D-NY), chairman of the Democratic Congressional Campaign Committee, told The Cable. “I’m willing to listen but I think that asking Congress to weaken and diminish current sanctions is not hospitable on Capitol Hill.”

“I’d say no,” said Sen. Bob Casey (D-PA) when asked if he’d accept a presidential plea to lift sanctions. “They’ve got a long way to go to demonstrate the kind of credibility that would lead us to believe we can move in a conciliatory direction. And sanctions are what has strengthened the administration’s hand.”

Opposition from Democratic lawmakers represents more than just a political headache for the administration. Congress has the power to impose, modify or remove sanctions regardless of what the White House wants, and it has shown a willingness to overrule the administration in the past. In late 2011, for instance, New Jersey Democrat Robert Menendez, a senior member of the Senate Foreign Relations Committee, worked with Illinois Republican Mark Kirk to impose crushing sanctions on the Iranian central bank despite strong opposition from the administration.

It is far from clear that Iran will offer enough concessions in the current talks for the administration to seriously consider softening or lifting the current sanctions. The Rouhani government has insisted on the right to continue enriching uranium on its own soil, something the White House opposes. Tehran has also yet to signal a clear willingness to shutter its underground, heavily-fortified nuclear plant at Qom, a source of particular concern for both the U.S. and Israel because it is largely impervious to airstrikes, or to dismantle any of its centrifuges. Even if Rouhani signed off, meanwhile, Iran’s supreme leader, Ayatollah Ali Khamenei, could veto the deal.

Still, the Obama administration’s chief nuclear negotiator, Wendy Sherman, told a Senate panel earlier this month that the White House was willing to potentially soften some of its sanctions if Tehran took “verifiable, concrete actions” to delay its nuclear program. Sherman also urged lawmakers to hold off on imposing new sanctions on Iran until Tehran detailed its potential nuclear concessions at this week’s talks.

Sherman’s testimony sparked predictable outrage from Republicans like Kirk, who said her comments showed that the White House was pursuing a policy of “appeasement,” but many Democrats were just as upset. Massachusetts Senator Ed Markey said the U.S. “should not relax the sanctions one inch while Iran’s intentions are still unknown.”

Markey is far from the only Democrat who believes that the White House needs to not just keep the current measures in place but also prepare to add newer, tougher ones.

“The intent of sanctions is to force Iran to halt and dismantle its nuclear weapons program,” lawmakers from both parties wrote in a letter this week signed by prominent Democrats like Senator Patty Murray of Washington, the head of the Democratic Senatorial Campaign Committee. “Once this goal has been accomplished in a real, transparent, and verifiable way we will be prepared to remove existing sanctions in a measured, sequenced manner. However, at this time, we reaffirm that a credible military threat remains on the table and we underscore the imperative that the current sanctions be maintained aggressively.”

Trita Parsi, the president of the National Iranian American Council, a group that lobbies on behalf of the Iranian American community, said Tehran would almost certainly reject any call to entirely dismantle its nuclear program before the current measures are softened or removed.

“The bar being set by the senators is wholly unrealistic,” Parsi said. “To say that existing sanctions won’t be lifted is a non-starter.”

Meanwhile, as the voices of Iran hawks dominate the halls of Congress, Democratic lawmakers who support a less rigid opening position have been largely silent, such as Rep. Keith Ellison (D-MN) or Rep. Jim McGovern (D-Mass).

Some have chalked up the relative silence to the shutdown. “We’re in such a weird situation on the Hill with the shutdown and all the oxygen is pretty much going to that fight,” said Rep David Price (D-NC) who gathered 131 signatures in favor of engagement with Rouhani in July.

Others chalked up the lack of administration support to a desire to wait-and-see how the talks unfold. “Rouhani is still a little bit of a mystery to everyone,” said a top Senate aide whose boss leans dovish. “On one hand, we’ve seen this movie before — crazy nuke states pretend to negotiate while buying time to enrich (a la North Korea) … [B]ut his perceived openness seems to have the implicit backing of the mullahs — which adds a new element to these negotiations, and one that could result in some actual concessions.”

Still, lawmakers like Menendez, Murray and Kirk show no signs of softening their positions. Their demands to maintain the current measures reflect, in part, the success of a concerted lobbying campaign by AIPAC. The pro-Israel group has sat out some recent potential fights over large-scale U.S. weapons sales to Saudi Arabia and the United Arab Emirates in order to focus all of its energy on Iran. During its annual conference in February, AIPAC sent hundreds of volunteers to Capitol Hill to personally lobby lawmakers from their home states to support tough measures on Iran. It has also drafted templates of letters lawmakers could send the White House under their own names calling for continued sanctions on Iran.

Iran is one of the few issues that bind Democrats and Republicans, so AIPAC is in some ways preaching to the choir. Israel said he hadn’t been lobbied by the group, but he said it had no reason to.

“Maybe they’re not talking to me because they know my profile is strong and deep on this issue,” Israel said.