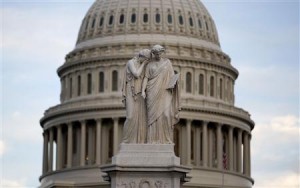 The U.S. Senate prepared for a last ditch effort Wednesday to avoid a historic lapse in the government’s borrowing authority, a breach that President Barack Obama has said could lead to default and deliver a damaging blow to the global economy.
After a day of stop-and-go negotiations, the top Democrat and Republican in the U.S. Senate were said to be close to agreeing on a proposal to raise the debt limit – and reopen the partially shuttered government – for consideration by the full Senate on Wednesday.

The measure’s fate remained uncertain in the fractured Republican-controlled House of Representatives, which failed twice Tuesday to produce its own plan.

“This is now back on track,” Democratic Senator Heidi Heitkamp told CNN late on Tuesday, after a day of chaotic developments that frayed the nerves of many members of Congress and global financial markets.

McConnell and Reid resumed stalled talks after a roller coaster day that saw two separate legislative efforts in the House buried after it became apparent too many Republicans were rebelling against their leaders’ plans.

Following weeks of bitter fighting among Democrats and Republicans, the layoff of hundreds of thousands of federal workers and turmoil for stock markets, the deal under discussion – if eventually enacted – would basically give President Barack Obama what he has demanded for months: A straight-forward debt limit hike and government funding bill.

The deal would extend U.S. borrowing authority until February 7, although the Treasury Department would have tools to temporarily extend its borrowing capacity beyond that date if Congress failed to act early next year.

With the final details not yet nailed down, as it stood Tuesday night, the agreement envisioned funding government agencies until January 15, ending a partial government shutdown that began with the new fiscal year on October 1.

Asian stock markets were listless in early trading on Wednesday as they waited to see if Washington was closing in on a deal to resolve the debt crisis. Stocks showed little change and remained near a five-month peak.

Senate aides said the two leaders are looking at two possible ways of speeding the legislation through the chamber, which often can bog down for days with procedural hurdles.

Senator Dick Durbin, the second-ranking Senate Democrat, told reporters: “In order to move this quickly tomorrow or as soon thereafter as possible, we need cooperation of members. If they want to drag their feet, use every objection they can, this could take a few days.”

Under one scenario, all 100 senators would agree to let Democrats schedule quick votes to pass the bill. That would mean that Tea Party firebrands, such as Republican Senator Ted Cruz, would give up their rights to delay a vote.

Cruz has not publicly announced his intentions but some Senate aides think that the Texas freshman with presidential aspirations has been sending positive signals in recent days.

The deadlock led to federal agency shutdowns as Obama and his fellow Democrats stood firm against changing the law.

The other scenario would have the House send a formal “message” to the Senate to pave the way for quick Senate action, according to a Senate aide who asked not to be identified.

Again, it was not clear whether House Republicans would go along with that option.

Assuming the Senate succeeds, House Speaker John Boehner will have to decide whether to allow passage of a bill that many of his fellow Republicans might oppose, a decision that could impact the top Republican’s political future.

Uncertainty over Washington’s ability to avert a default led Fitch Ratings to warn it could cut the sovereign credit rating of the United States from AAA, citing the political brinkmanship over raising the federal debt ceiling.

House Republicans twice tried to come up with a new compromise but failed to satisfy Obama, Senate Democrats or Tea Party conservatives who are determined to win changes to the president’s signature healthcare law before they will agree to concessions on the budget.

The first House Republican attempt was shot down in a closed-door meeting that had begun with members singing the hymn “Amazing Grace.”

The second plan was scuttled hours before it was expected to hit the House floor for a vote after the influential Heritage Action for America, a conservative group, urged a “no” vote because it did not do enough to stop Obama’s healthcare law.

If Congress fails to reach a deal by Thursday, checks would likely go out on time for a short while for everyone from bondholders to workers who are owed unemployment benefits. But analysts warn that a default on government obligations could quickly follow, potentially causing the U.S. financial sector to freeze up and threatening the global economy.

The U.S. Treasury Department seized on Fitch’s downgrade threat to press Congress. “The announcement reflects the urgency with which Congress should act to remove the threat of default hanging over the economy,” a Treasury spokesperson said.

Numerous polls show Republicans have taken a hit in public opinion since the standoff began and the government partially closed. A Washington Post/ABC News poll released on Monday found that 74 percent of Americans disapprove of the way congressional Republicans have handled the standoff, compared with a 53 percent disapproval rating for Obama.

Another survey released by Gallup on Tuesday showed American confidence in the U.S. economy fell another five points last week as the government shutdown continued.

The crisis is the latest in a series of budget battles in recent years that have hurt consumer confidence and weighed on the economy. A Monday estimate by the Peter G. Peterson Foundation, a think tank, said the uncertainty caused by the frequent fiscal showdowns had boosted the unemployment rate by 0.6 of a percentage point, or the equivalent of 900,000 jobs since late 2009.

Photo: The statue of Grief and History stands in front of the Capitol Dome in Washington October 15, 2013. REUTERS/Joshua Roberts