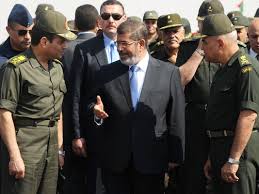 Three months after President Obama ordered a high-level review of U.S. aid to Egypt following a military takeover there, the White House settled on a middle ground Wednesday: maintaining key assistance for security and counter-terrorism efforts while suspending delivery of tanks, helicopters and other new military hardware.

The decision seeks to rebuke the Egyptian military for its ever-expanding crackdown on the Muslim Brotherhood movement, but also to maintain what Obama has called “a constructive relationship” with a historically crucial Arab ally.

U.S. officials announced they would withhold delivery of “big ticket” military systems worth hundreds of millions of dollars, including F-16 fighter jets, M1A1 Abrams tanks, Harpoon missiles and Apache helicopters. They also said they would suspend $260 million in direct cash assistance to the Egyptian government.

The administration said it would continue funding for counter-terrorism, border security and security operations in the Sinai Peninsula and Gaza Strip, which are key to Israel, and would still provide spare parts for Egypt’s large roster of U.S.-made tanks, warplanes and missile systems.

In a briefing for reporters, U.S. officials said they wanted to send “a pretty clear message” to the Egyptian military to end the violent clampdown and restore democratic institutions. But illustrating the difficult balance the White House is seeking to strike, officials emphasized that core U.S. security interests in the region, including the Egypt-Israeli peace treaty, would not be jeopardized by the cuts.

“There will be no diminution in Egypt’s ability to be a strong security partner for the United States,” said a senior administration official who spoke on condition of anonymity.

The fate of U.S. assistance to Egypt — a $1.55-billion annual package widely viewed as a linchpin of stability in the Middle East — has been one of the most vexing questions for the Obama administration since July, when the Egyptian army deposed the democratically elected president, Mohamed Morsi, forcibly broke up pro-Morsi protest camps and jailed as many as 2,000 of his supporters in the Muslim Brotherhood.

The counter-terrorism programs are at the core of the U.S.-Egyptian military relationship and Pentagon officials have called on Egypt’s generals for years to modernize their force and improve border surveillance.

Senior Israeli officials have urged the Obama administration not to cut aid substantially for fear of weakening the Egyptian military, which has honored the 1979 peace treaty with Israel, or pushing it closer to Persian Gulf governments that have pledged billions in aid since Morsi’s ouster.

But U.S. officials have been dismayed by the generals’ continued crackdown on the Muslim Brotherhood. On Sunday, as the nation marked a major military holiday, security forces fired live ammunition at Brotherhood marchers, leaving 57 people dead, according to the government’s tally.

Defense Secretary Chuck Hagel spoke with his Egyptian counterpart, Defense Minister Abdel Fattah Sisi, for 40 minutes Wednesday to explain the decision. Officials said the aid could be restored once the Obama administration was satisfied that Egypt was taking steps back toward democratic rule.

“We think they are hearing us,” a second official said.

Earlier Wednesday, Egyptian officials announced that Morsi would stand trial next month on charges of inciting the killing of opponents, which his supporters have denied.

In a speech to the United Nations General Assembly last month, Obama acknowledged problems with Morsi’s one-year tenure, in which the Egyptian leader consolidated power and faced massive street demonstrations. But he also expressed deep concern about military rule.

“We’ll continue support in areas like education that directly benefit the Egyptian people,” Obama said. “But we have not proceeded with the delivery of certain military systems, and our support will depend upon Egypt’s progress in pursuing a more democratic path.”

After Morsi was overthrown July 3, the administration announced it would delay delivery of four F-16 fighter jets and it canceled a mostly ceremonial joint exercise between the U.S. and Egyptian militaries. But Obama refused to label Morsi’s ouster a coup, a legal distinction that would have triggered an automatic cutoff of U.S. aid to the Egyptian government.

Analysts said suspending delivery of additional warplanes and tanks would represent a slap on the wrist to the Egyptian generals and probably wouldn’t change their political calculus.

“These things are critical in the short term at least,” said Shadi Hamid, a Middle East expert at the nonpartisan Brookings Institution. “Anything that promotes core American interests will continue.”

Morsi, who has been held incommunicado in military detention, is scheduled to stand trial Nov. 4, and 14 senior Brotherhood leaders are to be tried with him, according to court documents. Most of the Brotherhood’s leadership is in jail, but several key figures are fugitives and will be tried in absentia.

The charges against the deposed leader date to his turbulent year in office. On Dec. 4, tens of thousands of protesters staged a sit-in outside the presidential palace, with some threatening to storm it. Clashes then erupted between the protesters and Brotherhood backers, leaving at least 10 people dead.

The Brotherhood and its Freedom and Justice party have said their supporters were acting to defend Morsi because police made no move to disperse the protesters or protect the palace.

Photo: Then-President Mohamed Morsi talks with Defense Minister Gen. Abdel Fattah Sisi, left, at a military base in Ismailia, Egypt, in October 2012. The U.S. says it will maintain key assistance for security and counter-terrorism efforts in Egypt but suspend delivery of tanks, helicopters and other new military hardware in response to the military ouster of Morsi in July. (Egyptian Presidency / October 9, 2013)