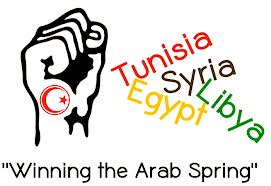 While the social and political costs of the Arab Spring have been carefully counted, the economic ones haven’t yet been explored quite as deeply. HSBC’s economists took a stab at it this week, estimating affected countries will have lost $800 billion of economic output by the end of next year.

The premise is that GDP in Egypt, Tunisia, Libya, Syria, Jordan, Lebanon and Bahrain – all of which have in some way felt the effects of revolution and unrest sweeping the region over the past two years – will come in 35% lower in 2014 than it would have been had that turmoil not taken hold. Between 2011 and 2014, the HSBC report says, lost output amounts to about $800 billion.

“In lost life, foregone economic output and weakened political institutions, the costs of the Arab Spring have been extraordinarily heavy and continue to mount,” the report says.

The outlook continues to be bleak in Egypt, where unemployment has only accelerated since the revolution and the country’s public finances are in disarray. Financial aid from GCC countries has helped – the Gulf’s monarchies pledged $12 billion after former president Mohammed Morsi was ousted in July. HSBC has upped its economic growth forecasts, but there’s a risk that the breathing space provided by aid might also slow the pace of fiscal reform.

An economic recovery has not taken hold in Tunisia yet, the HSBC report says. Libya is in worse shape both politically and economically as it struggles to revive oil production. Syria’s civil war is continuing, and its economic effects are spilling over into Lebanon.

The story is different in the oil-rich GCC, which apart from Bahrain has been spared the kind of foundational rattling that has spread elsewhere. The response in the Gulf has mostly been to raise public spending to placate citizens, which has boosted output.

Some parts of the region – Dubai, in particular – have benefited from a reputation as safe havens in the Middle East. HSBC estimates $500 billion of public spending in the region this year and an overall budget surplus of 9% of GDP as energy revenues continue to stream in.

Yet even for the Gulf, the economic consequences of the turmoil aren’t all positive, the HSBC report says. Higher government spending has perpetuated dependence on the public sector and slowed down reforms meant to stimulate private-sector growth.

“The gain in spending is exacerbating structural weaknesses – dependence on oil earnings has never been higher and the role of the state rarely more dominant,” the report says. “Rapid increases in current spending have created long-term fiscal obligations that promise only limited returns.”