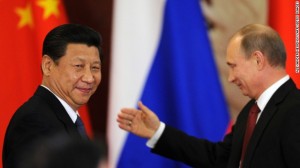 Kerry is leading the U.S. delegation to APEC, after the federal government shutdown prompted President Obama to cancel his plans to attend.

The decision was a blow to Obama’s efforts to expand U.S. influence in Asia. But on Monday, Putin told reporters that he understood Obama’s decision.

“It’s a difficult situation and I think that the fact that the president of the United States did not come is justifiable,” Putin told an audience of global business executives. “If I were him I wouldn’t have come, probably, either.”

Putin, who along with Chinese President Xi Jinping is now arguably the most powerful world leader in attendance at the forum, at first appeared to smirk when asked by an American audience member what he thought of Obama’s absence.

But his answer turned out to be a broad endorsement of Obama’s choice, and a thoughtful reminder to other nations here of their stake in the domestic political impasse in Washington.

“We are all interested in the United States overcoming this crisis,” Putin said, speaking through an interpreter.

In addition to the United States being the world’s biggest economy, the dollar is the world’s largest reserve currency, Putin noted, adding that what happens to the dollar affects other currencies as well.

“It is important to all of us,” Putin said, to sustained applause.