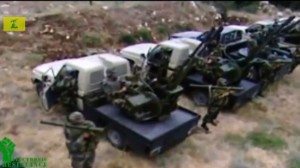 Israeli Home Front Defense Minister Gilad Erdan was quoted on Tuesday as saying that Hezbollah has over 200,000 missiles capable of hitting any spot in the country, Times of Israel reported on Tuesday.

“According to an IDF worst-case scenario, Israel could find itself under attack from thousands of rockets that could last three weeks,” Erdan said at a conference at Bar-Ilan University, according to Israel Radio. “The Hezbollah organization has over 200,000 missiles capable of hitting any house in Israel.”

Also speaking at Bar-Ilan, IDF Chief of Staff Benny Gantz was quoted as saying that Israel’s future wars could feature an array of new threats.

“The morning of the war could open with a missile on the Kirya building [the Defense Ministry’s HQ in Tel Aviv], with a cyber attack on banks, with a mass charge on a border town, or a tunnel packed with explosives that reaches a kindergarten,” Gantz told attendees at a conference at Bar-Ilan University’s Begin-Sadat Center

“These organizations, like Hezbollah, possess abilities that countries lack,” he warned.