Iraq bombings kill 33, including 12 children in one attack 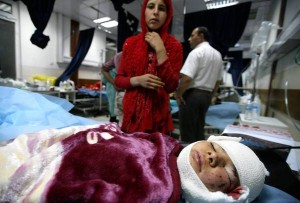 A suicide bomber detonated an explosives-laden car near an elementary school in northern Iraq on Sunday, killing at least a dozen children, officials said. They were among 33 people killed nationwide on another day of widespread sectarian violence.

Children ages 6 to 12 were in class when the car bomb exploded in a village near Tall Afar, according to the city’s mayor, Abdul Aal Obeidi. The area has been a hotbed for hard-to-rout Sunni Muslim insurgents and a corridor for extremist fighters arriving from nearby Syria.

“We and Iraq are plagued by Al Qaeda,” Obeidi said. “It’s a tragedy. These innocent children were here to study. What sins did these children commit?”

Another bomb struck a nearby police station, he said. The dead included 12 children, the school principal and two policemen. Ninety people were wounded, Obeidi said.

Part of the single-story school collapsed as a result of the blast, the mayor said. The village, 260 miles northwest of Baghdad, is home to about 200 residents.

The mounting death toll in Iraq is raising fears that the country is falling back into the spiral of violence that brought it to the edge of civil war in the years after the 2003 U.S.-led invasion.

Sunday’s blasts began about 9:30 a.m. in the Shiite Muslim Turkmen village of Qabak. Hours later, another suicide bomber, this time on foot, blew himself up as Shiite pilgrims walked through Baghdad’s largely Sunni neighborhood of Waziriya. At least 12 people were killed, authorities said.

There was no immediate claim of responsibility for the latest attacks, but suicide bombers and car bombs are frequently used by Al Qaeda’s Iraq branch. It often targets Shiite civilians in an effort to undermine the Shiite-led government.

Photo: A wounded Iraqi child sleeps after receiving medical care at a hospital in the northern Iraqi city of Dohuk on October 6, 2013, following a bombing at her school in the Turkmen Shiite village of Qabat, near the Syrian border. AFP PHOTO/SAFIN HAMEDSAFIN HAMED/AFP/Getty Images ** TCN OUT **