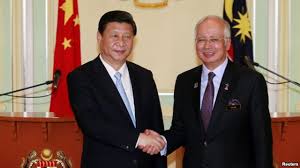 As President Obama made apologetic calls to Asia to cancel his planned trip to the region, China’s leader, Xi Jinping, was taking a star turn in some of the same countries Mr. Obama would have visited.

Mr. Xi this week became the first foreigner to address the Indonesian Parliament, offering billions of dollars in trade to the country that was Mr. Obama’s childhood home. The Chinese leader then moved on to Malaysia, before preparing to attend two Asian summit meetings that Mr. Obama had to abandon because of the government shutdown at home.

With the cancellation of the visits, the much-promoted but already anemic American “pivot” to Asia was further undercut, leaving regional allies increasingly doubtful the United States will be a viable counterbalance to a rising China.

Coming after Mr. Obama’s U-turn on intervention in Syria amid signs of a new American insularity, the revolt in the House of Representatives over health care left many Asians puzzling over America’s messy democracy and wondering if the United States would be able — or willing — to stand up to China in a confrontation.

That wariness, Asian officials and analysts say, is giving China a new edge in the tug of war with the United States over influence in Asia, with the gravitational pull of China’s economy increasingly difficult to resist.

“How can the United States be a reliable partner when President Obama can’t get his own house in order?” asked Richard Heydarian, a foreign policy adviser to the Philippine Congress and a lecturer in international affairs at Ateneo de Manila University in Manila. “It makes people wonder: Is the United States really in the position to come to our aid in the event of a military conflict?”

And in rare public criticism of the United States by a senior Singaporean official, Bilahari Kausikan, the recently retired permanent secretary of the Foreign Ministry, said Thursday in a speech in Hanoi, Vietnam, that in the face of China’s challenge, Washington — and its ally Japan — was “not exerting sufficient countervailing economic influence.”

China’s mounting investments in Southeast Asia, including the establishment of a $50 billion Chinese infrastructure bank to rival development banks influenced by the United States, are no longer “just a matter of business” but “a core Chinese interest,” Mr. Kausikan warned.

That is not to say the United States will lose its standing in the region it has long dominated anytime soon. Many Asian countries remain wary of China’s territorial ambitions and had welcomed the “pivot” as protection against extensive Chinese claims in the South China and East China Seas. The presence of tens of thousands of American troops in Japan and South Korea and the United States naval fleet roaming the Pacific add to that projection of power.

As if to bolster that point, the American secretary of defense, Chuck Hagel, visited South Korea and Japan this week for talks to beef up the alliances with those two countries. He was joined in Japan by Secretary of State John Kerry for the signing of a security agreement that allows the deployment of American surveillance drones there for the first time and gives implicit backing to Japan’s slow but steady moves to strengthen its once-powerful military.

But even in Japan, one of America’s closest allies, doubts were expressed about the United States’ willingness to offer backing in the event of a conflict with China over disputed islands in the East China Sea known as the Diaoyu in China and the Senkaku in Japan. The conservative government of Prime Minister Shinzo Abe has already increased the military budget, partly from fear that the United States would not come to Japan’s aid despite its treaty obligations, analysts said.

“The analogy is when Obama initially tried to use military strikes against Syria, but then they didn’t happen,” said Ken Jimbo, an associate professor of international security at Keio University in Tokyo. “What if North Korea is aggressive towards South Korea, how would the Obama administration react? What about the Senkaku: if China is assertive with its maritime forces, would Washington provide any physical commitment?”

In Seoul, Mr. Hagel and the chairman of the Joint Chiefs of Staff, Gen. Martin E. Dempsey, sat with President Park Geun-hye this week at a dinner to celebrate the 60th anniversary of the American-South Korean alliance, even as the popular press hammered the United States for a “new isolationism.”

In the mass-circulation newspaper JoongAng Ilbo, a columnist, Kim Young-hie, wrote, “Washington’s primary concerns have veered away from Asia, the Korean Peninsula and North Korea.” He labeled the Obama administration’s policy toward North Korea “strategic neglect.”

In Indonesia, where China has long been viewed with suspicion, attitudes toward the Chinese have warmed, said Rizal Sukma, executive director of the Center for Strategic and International Studies in Jakarta.

“I would call Indonesia’s attitude towards China now as a display of growing comfort amid persistent ambiguity,” Mr. Sukma said. “On the one hand, it values economic opportunities offered by China. On the other hand, Indonesia is still anxious about China’s long-term intentions in East Asia.”

He added, “Like many other East Asian countries, Indonesia has been in doubt regarding America’s ability to sustain the pivot strategy, with the huge cuts in the defense budget over the next five years.”

In his speech in Jakarta, Mr. Xi said China expected to reach one trillion dollars of trade with the 10 members of the Association of Southeast Asian Nations by 2020.

All countries in East Asia, except the Philippines, now count China as their chief trading partner, according to Peter Drysdale, an economist who heads the East Asia Forum at the Australian National University in Canberra.

China’s trade with those nations has grown so quickly in the last 10 years, overtaking the United States as many countries’ prime trading partner, that China would have to increase its trade only fourfold to reach that trillion-dollar goal, he said.

“United States trade would have to increase a tad more than fivefold to match that — a bit more of a stretch,” Dr. Drysdale said.

By failing to show up at the Asia-Pacific Economic Cooperation meeting, which opens on the Indonesian island of Bali on Monday, and by not attending the East Asia Summit in Brunei two days later, Mr. Obama could be ceding Mr. Xi plenty of ground.

One of Mr. Obama’s goals in Bali would have been to nudge those Asian countries that Washington had invited to join the Trans-Pacific Partnership trade pact into finishing negotiations by the end of the year. The administration has not invited China to join the 12-member group, and China views the trade agreement as a tool to contain it.

The pact — a major platform of Mr. Obama’s Asian pivot because it suggests that the new strategy is not only military but also economic — is running into problems in some countries, particularly Malaysia, where Mr. Obama was supposed to go next week.

With Mr. Obama embroiled in battle with House Republicans, Asian leaders will be asking whether the president possesses the political capital to get the trade pact through Congress, Asian officials said.

And without Mr. Obama in Bali, Mr. Xi will be able to push an alternate trade grouping, the Regional Comprehensive Economic Partnership, which embraces a broader set of Asian countries than the Pacific Partnership. The United States is not included.

If showing up is more than half the game, some Asians say, Mr. Xi’s presence will highlight Mr. Obama’s absence.

“He is winning hearts and minds in the right places,” said Endy Bayuni, senior editor of The Jakarta Post, a national daily newspaper, speaking of the Chinese leader. And, he said, even if Mr. Obama had turned up at the Bali meeting, he would have most likely been afforded a “less warm reception.”