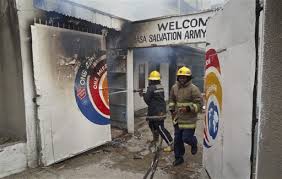 MOMBASA: Four rioters died and a church was torched amid gunfire today, as police in Kenya’s sport city of Mombasa quashed protests sparked by the killing of a Muslim cleric.

Battles broke out as armed paramilitary police moved towards a mosque, whose leaders have been accused of links to Somalia’s Islamist al-Shabaab, insurgents who massacred 67 in Nairobi’s Westgate shopping mall last month.

Angry protesters took to the streets after unknown gunmen assassinated a popular Muslim preacher and his three companions in a drive-by shooting late yesterday, a killing that mirrored the murder of another extremist cleric last year that provoked days of deadly riots.

“We will not tolerate unruly youth taking over the town,” Mombasa police chief Kipkemoi Ropsaid, adding that 24 had been arrested.

A Salvation Army church was torched, but firemen brought the blaze under control.

Mombasa is Kenya’s main port and a major tourist hub, popular with visitors coming to enjoy the white sand beaches on the Indian Ocean coastline.

The crisis centre said three people died of stab wounds, while the Red Cross said another hit by gunfire died in hospital. Seven others were wounded.