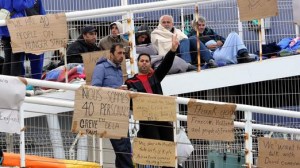 France on Friday offered some 60 Syrians the right to seek asylum after the refugees occupied a key point in the Channel port of Calais in a desperate bid to get to Britain.

The refugees, 20 of whom are on a hunger strike, have since Wednesday occupied the footbridge of a ferry terminal at Calais port — from where ships leave for Britain — to press London to accept them.

They have voiced disappointment in France, saying they were treated worse than “animals”.

In a bid to end the crisis, some 50 police from the CRS anti-riot squad moved in early Friday to try and clear the refugees from the footbridge but backed off when two of them climbed on top of a nearby building and threatened to jump off if they approached.

The prefect of the Pas-de-Calais region Denis Robin then went to the site and offered the Syrians, currently illegal immigrants, the right to asylum.

“Today, the Syrians present here are caught in a stalemate. What we can do is to offer them a status on French territory…in other words to make a request for asylum,” Robin told reporters.

He said each demand for asylum had “95 percent chances of success,” adding that he was in contact with the British embassy in Paris.

“We cannot take any decision on their access to Britain,” Robin said. “I am not persuading them to settle in France but trying to legalise their status.”

But the protesting refugees, most of whom arrived a month ago in Calais, have voiced disappointment at the way they were treated in France.

“We thought that France was the country where human rights are respected,” said Tarik, a 19-year-old from the southern city of Deraa near the border with Jordan.

“But we live outside like dogs, hunted down by the police, we see we are not welcome, how can we seek asylum here?” he said.

The former engineering student said he was convinced he would find “more humanity” in Britain and eventually bring over his mother and younger brothers currently living in Egypt.

Ali, a 38-year-old, said although French President Francois Hollande had taken a strong stand against the regime of President Bashar al-Assad for using chemical weapons, the French were not welcoming at all.

“Why does the president say one thing and the police another?” Ali said, adding that he had spent $13,000 (9,500 euros) to come to a country where the “president said ‘we must help Syrians'”.

“Here even animals are better treated than us,” he said.

The UN refugee agency has said 17 countries, including France, have agreed to receive quotas of refugees fleeing the bloody conflict in Syria.

France has had only 850 registered demands for asylum from Syrians since the start of this year, the UN High Commissioner for Refugees said late last month.