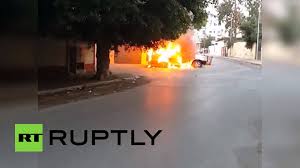 An armed mob broke into the Russian Embassy compound in the Libyan capital of Tripoli on Wednesday, climbing over walls, breaking down a metal gate and shooting in the air. One of the attackers was killed by the gunfire, and four more were wounded, Libyan officials said.

The Russian Foreign Ministry confirmed the attack and said none of the embassy staff was wounded.

Libyan officials said they believed the break-in was in response to the death of a Libyan air force pilot, who they said was killed by a Russian woman.

Wednesday’s violence briefly raised fears of a repeat of last year’s deadly attack on a U.S. compound in the eastern city of Benghazi, in which the U.S. ambassador and three other Americans were killed. In that instance, on the anniversary of the Sept. 11, 2001 terror attack, militants fired mortars at the consulate, surrounded it and set it on fire.

The Libyan official said Wednesday’s attackers took down the Russian flag that was hanging from the balcony of one of the buildings. But they did not enter the embassy buildings, he said, speaking on condition of anonymity because he was not authorized to talk to the media.

Russia’s Foreign Ministry Ministry spokeswoman Maria Zakharova told Ekho Moskvy radio that according to preliminary information no one among the embassy personnel was wounded.

The attackers were apparently reacting to the killing of a Libyan air force pilot Tuesday. Libyan authorities arrested a Russian woman and accused her of killing him and writing offensive graffiti in his blood. The woman also is accused of stabbing and wounding the pilot’s mother.

Authorities said they did not know what the woman’s motives might be, but noted that in the graffiti on the walls, she expressed sentiments against the Libyan uprising that drove longtime leader Moammar Gadhafi from power after an eight-month civil war in 2011.

Libya has been hit by a months-long wave of targeted killings against activists, judges and security agents.

On Wednesday, gunmen in Benghazi shot dead a naval officer and his 7-year-old son before fleeing the scene. Most killings are presumed to be the work of armed factions, often acting out of revenge.