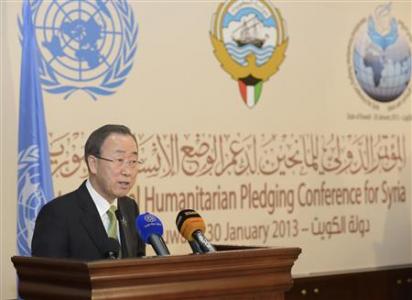 UN Secretary General Ban Ki-Moon has called on the emir of Kuwait to host a second donors’ conference to raise aid for Syrian refugees, the official KUNA agency said on Wednesday.

Emir Sheikh Sabah al-Ahmad Al-Sabah, who is on a private visit to the United States, received a phone call late Tuesday from Ban who “expressed hopes… for Kuwait to host the second donors’ conference to support the humanitarian situation in Syria,” KUNA said.

The United Nations launched a record $5.2-billion aid appeal in June to fund operations in Syria and neighboring countries, warning the number of Syrians needing help because of the conflict could rise to over 10 million by the end of 2013.

The aid is for food, which accounts for one-fifth of the sum, clean water, medical care and schooling, as well as to build refugee camps.

The UN appeal aims to raise $3.8 billion for refugees and $1.4 billion for operations in Syria.

More than 115,000 people have been killed and over 2.1 million forced to flee to neighboring countries since the war began in March 2011 after a crackdown on protests against strongman President Bashar al-Assad.

The refugee total is expected to swell to 3.5 million by the end of the year, according to the UN.

Within Syria, a total of 6.8 million people are forecast to need aid this year, the majority of them displaced by fighting.

Syria’s neighbors pleaded for more international support on Monday to tackle the huge influx of refugees from the war-torn country, warning the burden could destabilize the whole region.