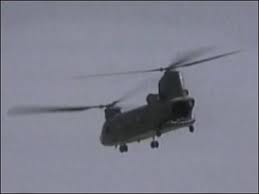 Gunmen shot down an Iraqi helicopter on Wednesday killing four security forces members during a military operation against militants in the desert, army officers said.

The dead were two crew members and two soldiers who were on board when the helicopter was shot down in a desert area west of Baiji, a town north of the Iraqi capital.

Iraqi helicopters are periodically hit by gunfire during operations, including one last month in which a helicopter pilot was wounded.

Violence has reached a level unseen since 2008, and there are fears Iraq is slipping back toward the intense Sunni-Shiite bloodshed that peaked in 2006-2007 and killed tens of thousands.

Iraq saw a sharp spike in violence including a series of bloody sectarian attacks in September, with the UN putting the monthly death toll at almost 1,000.

The Iraqi government approved on Tuesday hazard pay for security forces in seven “hot areas” including Baghdad, in a sign of the worsening security situation.