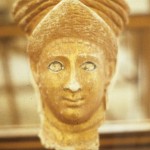 The number of artifacts stolen since the January 2011 revolution has reached around 2,000, Antiquities Minister Mohamed Ibrahim has revealed, adding that some one thousand of that number have still not been retrieved.

Ibrahim said Egypt’s antiquities sector had suffered a great deal as a result of ongoing political circumstances across the country over the past two and a half years, with museum projects halted and others endangered due to lack of funding.

The security vacuum that followed the revolution has led to a number of attacks on museums, the minister added, pointing to the Egyptian Museum in Tahrir Square after it was attacked on the 28 January “Friday of Anger” in 2011 with many artifacts stolen or damaged.

Twenty-six artifacts belonging to the museum were later retrieved. 29 other are still missing. The retrieved pieces will be put on display again next week after being restored, Ibrahim claimed.

The minister added that Interpol has been informed of the missing artifacts, in addition to other international organizations such as UNESCO. A list of stolen items has since been drawn up and distributed to galleries and auction houses across the world.

Another worrying incident for the Antiquities Ministry has been the raid on the Mallawi Museum in Minya last month, Ibrahim added.

“The Mallawi Museum contained more than 1,089 artifacts that were stolen, while 32 pieces were smashed,” he explained. “Ten pieces remained untouched and were moved to a store house.”

The Mallawi Museum was attacked during the violence that swept the country after the dispersal of two sit-ins staged by supporters of deposed President Mohamed Morsy.

The minister had pleaded for stolen items to be returned, and that the perpetrators would not face legal action afterwards.

The stolen objects were also reported to the UNESCO.

A storehouse in Giza’s Meet Rahina was also attacked and 231 artifacts were stolen. 104 of that number were retrieved..

Photo: This is one of about 1,050 artifacts looted from Egypt’s Malawi National Museum.