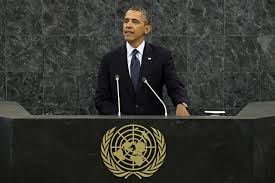 President Barack Obama argued the U.S. case before world leaders for resolving the Middle East’s deepest conflicts, but pushback from Iran dimmed hopes that had been building for a rapid leap forward.

Iranian President Hasan Rouhani’s decision against meeting Mr. Obama—or even exchanging a handshake—at the U.N. General Assembly in New York on Tuesday soured what American and European officials had hoped would mark an advancement in efforts to wind down tensions.

Mr. Rouhani followed that rebuff with an address to the U.N. in which he aired his hopes for reconciliation while holding firm on Iran’s right to enrich uranium and criticizing some aspects of American foreign policy, including economic sanctions on Tehran.

Mr. Obama’s address earlier on Tuesday was framed as an explanation of his approach to the Middle East and how he plans to engage the region for the remainder of his time in office.

“Some may disagree, but I believe that America is exceptional” because of its willingness to get involved in the outside world, he said—a direct rebuke to criticism by Russian leader Vladimir Putin of Mr. Obama’s call for action in Syria.

The president posed the Syrian civil war as a test for the world body—urging a Security Council resolution this week demanding the dismantling of Damascus’s chemical-weapons arsenal—and called on Russia and Iran to use their influence with Syrian President Bashar al-Assad to force a political process to end the conflict.

Some U.S. officials see a potential thaw with Iran as a way to gain leverage in bringing a resolution to the Syrian civil war and the Arab-Israeli conflict.

The Iranian decision against a meeting between the presidents stalled what had been building as a potential diplomatic advance between Washington and Tehran after more than 30 years of conflict.

U.S. officials pledged to push onward with Iranian diplomacy on Tuesday, after Mr. Obama told the annual gathering of world leaders that he had ordered Secretary of State John Kerry to oversee engagement with Tehran.

Those efforts are set to begin instead on Thursday in a meeting between Mr. Kerry, Iranian Foreign Minister Javad Zarif and other envoys involved in nuclear negotiations.

Mr. Rouhani forecast a thaw in his own U.N. address, which came on Tuesday afternoon, hours after Mr. Obama’s speech.

“Iran is seeking to resolve issues, not create problems. There is no issue or topic that cannot be resolved with hope, moderation, mutual respect and rejection of violence,” Mr. Rouhani said.

Mr. Rouhani’s unwillingness to meet Mr. Obama rekindled concerns inside the White House that Iran’s president may be too weak to cut a deal.

Yet his unwillingness to meet Mr. Obama rekindled concerns inside the White House that Iran’s president may be too weak to cut a deal.

U.S. officials said they believed the new Iranian president, elected in June, didn’t agree to a meeting out of fear that he could be attacked politically by hard-liners back in Tehran.

“We have said publicly and we also said privately to the Iranians, that we’re open to having discussions on the margins [at the U.N.]—informal discussions, not a bilateral meeting. That proved to be too complicated for the Iranians to do at this point,” a senior Obama administration official said.

The official said Iran’s relationship with the U.S. is “clearly quite different” from other countries.

Iranian officials sought to play down the prospects of a meeting, saying that nothing had been formally announced. The officials pointed out that Mr. Rouhani was holding one-on-one talks with Western leaders such as French President François Hollande and International Monetary Fund Managing Director Christine Lagarde.

Mr. Rouhani, addressing the General Assembly on Tuesday, struck a more conciliatory line than Mr. Ahmadinejad, who alienated Western leaders through his speeches that questioned the Holocaust and the role of al Qaeda in the Sept. 11, 2001, attacks.

Mr. Rouhani won presidential elections on the pledge to reduce sanctions on Iran and end its international isolation. Iran’s new president directly reached out to Washington and said an agreement could be reached on the nuclear program. And he indicated that his government would quickly move to address concerns that it is seeking to build atomic weapons, something Tehran has repeatedly denied.

U.S. officials said they believed the new Iranian president, elected in June, didn’t agree to a meeting out of fear that he could be attacked politically by hard-liners back in Tehran.

Iranian President Hasan Rouhani told a meeting of the U.N. General Assembly the world must oppose violence and extremism in all forms and that peace is “within reach.”

In an address to the United Nations General Assembly Tuesday, Iranian President Hasan Rouhani said having nuclear weapon capabilities would contravene the country’s “religious and ethical convictions” and that Iran does not want tension with the international community.

“Our national interests make it imperative that we remove and end all reasonable concerns about Iran’s nuclear program,” Mr. Rouhani said. “We can arrive on a framework to manage our differences.”

Mr. Rouhani was uncompromising on Iran’s position that it would continue to produce nuclear fuel, in a program in violation of U.N. Security Council resolutions that demand Tehran stop the enrichment of uranium.

Iran’s insistence of its right to enrich has been the main issue upending nearly a decade of diplomacy aimed at resolving the nuclear dispute.

“Nuclear science in Iran has become homegrown and nuclear enrichment has reached mass production,” Mr. Rouhani said. “Therefore the idea that the peacefulness of Iran’s nuclear program can be ensured through illegal means of pressure and blocking the program is a fantasy and unrealistic.”

“Iran has a baseline set of positions they have taken for a long time,” the senior administration official said. “We would not expect them to shift their negotiations publicly.”

Mr. Obama, in his address, said the U.S. was cautious in embracing Mr. Rouhani’s overtures. But he said he believed a unique opportunity had arisen if Mr. Rouhani takes concrete steps to curtail Iran’s nuclear program.

Mr. Obama said he had asked Mr. Kerry to test Iran’s recent conciliatory posture and see whether a nuclear accord can be reached.

“The United States and Iran have been isolated from one another since the Islamic Revolution of 1979. This mistrust has deep roots,” Mr. Obama said.

“We should be able to achieve a resolution that respects the rights of the Iranian people, while giving the world confidence that the Iranian program is peaceful. To succeed, conciliatory words will have to be matched by actions that are transparent and verifiable,” he said.

Addressing the broader Middle East, Mr. Obama said that a resolution of two main underlying issues—Iran’s nuclear intentions and the Israeli-Palestinian conflict—would open doors to progress across the region.

Mr. Obama again pressed world leaders to back the U.S. push to forge an independent Palestinian state. Reaching such an accord, he said, would have an impact on stabilizing the region.

“All of us must recognize that peace will be a powerful tool to defeat extremists, and embolden those who are prepared to build a better future,” Mr. Obama said.

He said a U.N. Security Council resolution on Syria should be followed by an international conference aimed at creating a post-Assad transitional government.

“Now, there must be a strong Security Council resolution to verify that the Assad regime is keeping its commitments, and there must be consequences if they fail to do so,” Mr. Obama said. “If we cannot agree even on this, then it will show that the U.N. is incapable of enforcing the most basic of international laws.”

Mr. Obama said his administration was committed to remaining deeply engaged in the Mideast, even as the U.S. draws down its military presence.

He also countered criticism of U.S. efforts as either too involved or too disengaged.

Mr. Obama warned Mideast leaders that Americans themselves have grown weary of financing a major American role in the region. He said, though, that the Middle East and North Africa could be at risk if the U.S. significantly pulls back.

“The danger for the world is that the United States, after a decade of war, rightly concerned about issues back home and aware of the hostility that our engagement in the region has engendered throughout the Muslim world, may disengage, creating a vacuum of leadership that no other nation is ready to fill.”