Who Rules Lebanon? It’s NOT its Elected Representatives. 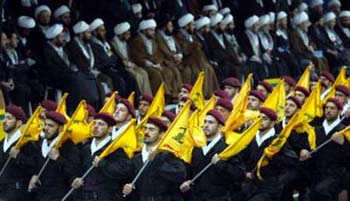 The fact that I do not agree with practically any of the ideas, believes and concepts that Hezbollah subscribes to is clear and has been established a long, long time ago. If for nothing else, the fact that I consider theological beliefs as being discriminatory and when applied to the public square they form a major interference with the rights of individuals to express their views is enough grounds to make it clear that there is nothing in common between the vision of a secularist, democrat who believes strongly in human rights and cherishes them and the paradigm of a theocrat who follows blindly the dictate of the religious leader in Qom.

The following is not about these differences that can never be bridged although I will spare no effort to protect their right to promote their ideas legally. The following is sort of an expression of admiration of sorts for the ability of Hezbollah to pretend that they are only another political party in Lebanon when in effect they are the hegemon that is in total control of every detail in Lebanese politics.

Every new development demonstrates on a daily basis that nothing in the country, called Lebanon, ever gets done without the direct approval or at least the acquiescence of Hezbollah. One can even argue that the Lebanese official machinery works for Hezbollah. Their domination of the machinery of state is so complete that it would be no exaggeration to say that the government was created to serve their every desire.

Some have attributed this dominance to the Iranian ability to excel in Chess. That is a fair analogy but reality shows that Hezbollah has managed to go beyond Chess; they have mastered Game Theory which is capable of beating any human chess player. But does this dominance lend legitimacy to the extralegal group? The answer is an unequivocal no. And that is the weakness, if you will, of the Hezbollah dominance. The public accepts it grudgingly but is awaiting the opportunity to show its rejection of this humiliating experience whereby a political party pretends to be just another player when in fact it is threatening, cajoling and blackmailing all others not to demonstrate any dissent otherwise it will unleash its well armed and well equipped “shock troops” to quell any disturbance.

Maybe a few examples would help illustrate this point. The only “democracy” in the world that has no say whether to start a war or not is that of Lebanon since that power rests totally within the leadership of a political party, a leadership that has not been elected by Lebanese citizens and a leadership that does not hide the fact that its major allegiance is to a foreign theocracy.  Maybe that should be viewed as the Lebanese exceptionalism. 🙂

Another example of the ability of Hezbollah to be in absolute control of the tiny country is their ability to allow a cabinet to be formed only whenever it serves their purposes, to ask a cabinet to resign once Hezbollah feels that it s control of the state will be enhanced in the absence of an effective cabinet. They were the power that created the Mikati cabinet, then they were the power that asked it to submit its resignation and they are the only obstacle that prevents Tamam Salam, the PM designate< from forming a cabinet.

And last but not least is the idea of self rule, a state within a state whenever that suits their purposes. Hezbollah, an extralegal group has given itself the power and the rationale to install, without government approval, its own communication network, to deploy its own police and security forces that will even give orders to the official forces. Hezbollah has the right to send volunteers to join a civil war, it’s their prerogative but when another group retaliated against Hezbollah by sending suicide bombers into its stronghold of Dahieh Hezbollah reacted by closing the few hundred ( maybe thousand) bloc area by installing an armed group at each and every entry point. They acted with impunity as a state within a state. The party took the decision to erect these check points and to arm the elements manning. The state was treated as if it does not exist. It does not.

As if the above measures were not enough, the part; Hezbollah; decided to purchase and install some relatively sophisticated systems at the major entry points into Dahieh that can sniff explosives and that have the capacity to shoot the drivers of the vehicles that do not comply with the orders issued by the vigilante group called Hezbollah. This last step caused some grumbling among many Lebanese citizens and so the Lebanese cabinet played the game , that it has perfected by now, and declared that as of today 2000 official Lebanese Security and Army personnel will replace the Hezbollah elements at these check points. The Lebanese Interior Minister in the care taker government; Mr. Charbel; even had the courage to declare that personal security measures will not be tolerated. I wonder who is working for whom? It is clear for this writer that the Lebanese security forces is engaged in satisfying the total demands of Hezbollah as long as they do not challenge the party and as long as the wages are paid by the Lebanese citizen. Score the game, set and match to Hezbollah against a no show opponent.