Private donors give edge to Islamists in Syria, officials say 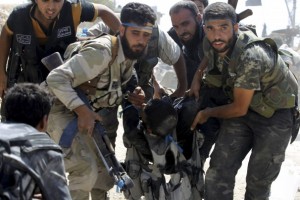 GAZIANTEP, Turkey — The stream of U.S. weapons heading to moderate rebel groups in Syria is being offset by a fresh torrent of cash for Islamist extremists, much of it from small networks of Arab donors who see the Syrian conflict as a step toward a broader Islamist uprising across the region, U.S. and Middle Eastern officials say.

The private donors, who use Twitter and other social media to collect millions of dollars from sympathetic Muslims, are providing crucial backing for Islamist militias that appear to be gaining ground in northern and eastern Syria, even as fighting stalls elsewhere, the officials said.

Dollars raised over the Internet are wired between private banking accounts and hand-delivered by courier, often in border towns like this city of 1.4 million, about 20 miles from the Syrian frontier, according to Middle Eastern intelligence officials who monitor the activity. Some fundraising pitches ask for specific pledges to cover the cost of a weapon, for example, or to finance an operation. For $2,400, a donor can pay for the travel, training and arming of a single non-Syrian fighter.

“You can even get a video afterward showing what it was you paid for,” said one senior intelligence official based in the region. The official spoke on the condition of anonymity to discuss his country’s intelligence collection.

While radical groups such as the Islamic State of Iraq and the Levant, Jabhat al-Nusra and Ahrar al-Sham have long relied on charitable giving from Persian Gulf states, the flow of private cash has enabled the extremists to retain their battlefield edge despite the loss of support from key Arab backers such as Qatar, which cut off aid to the most radical groups under pressure from the United States and Saudi Arabia, U.S. and Middle Eastern officials said.

The donations also have undermined Western efforts to ­strengthen the relative position of moderate and secularist rebel factions that are the intended recipients of U.S. weapons that began flowing into Syria last month, the officials said.

Obama administration officials say that they were working with gulf allies to shut off private cash flows but that the efforts have been complicated by the fundraisers’ under-the-radar tactics. The organizers also take advantage of lax regulations in some gulf states that allow fundraisers to set up small religious charities and canvass in mosques and other public venues, U.S. officials say.

“Much of this funding comes from private citizens in the gulf, particularly in Kuwait,” said David S. Cohen, the Treasury Department’s undersecretary for terrorism and financial intelligence. The country, a source of financial aid for extremist groups during the Afghan and Iraq wars, “unfortunately continues to be a permissive environment for terrorist fundraising,” he said.

What is more worrisome, officials say, is a new tendency among fundraisers to seek influence over the Syrian paramilitary groups they support. Some have adopted their own rebel militias and sought to dictate everything from ideology to tactics. Officials at one gulf-based organization, which calls itself the Ummah Conference, have helped promote a campaign to recruit thousands of Muslim volunteers for Syria while openly calling for a broader struggle against secular Arab governments and what one of its leaders terms “American terrorism.”

“These are people who believe in the ideology and have more than enough money to help the groups in Syria that share their views,” said a senior Middle Eastern intelligence official whose government closely monitors Syrian rebel factions and their foreign supporters. He spoke on the condition of anonymity because he was not authorized to grant interviews on the matter.

“Such groups think it is more halal — permissible — to support the jihadists than to give tax dollars to their own governments,” he said. “Unfortunately, it is a problem that you can never control. At least, not completely.”

In the border city of Gaziantep, where modern apartment blocks tower over the ruins of 6,000-year-old Hittite settlements, the waves of refugees who began arriving two years ago have given parts of the city a distinctive Syrian feel. Arab speakers now outnumber native Turks in many of the street cafes where men gather in the evenings to discuss the war over coffee and endless rounds of a tile game called Okey.

But in recent months, there has been a separate stream of foreigners headed toward the fight. Ahmad, a Syrian exile and interpreter who works in the nearby Kilis refugee camp, said he regularly sees Arab businessmen, distinctive in their white dishdashas, speeding toward the border in rented luxury cars with hired drivers.

“Some come in with bags of money, just looking to give it away,” said Ahmad, who requested that his last name be withheld because he feared he could be targeted for speaking publicly. “They bring money because it’s the thing that is most useful. Finding weapons if you have money is not a problem.”

Aid workers also have noticed new arrivals in towns and villages along Syria’s borders with Turkey and Jordan. Alaa Hadid, who manages aid workers in northern Jordan, said dozens of small charities with Arab backers have set up shop in cities such as Mafraq and Ramtha near the Syrian frontier. Some use cash to recruit young refugees as fighters, he said.

“Some of the charities seem okay, but others are run by scam artists,” he said. “They all make money by soliciting from the wealthy in the gulf.”

Exactly how much is raised is impossible to say. A senior U.S. official with access to classified intelligence on rebel financing said gulf-based networks have collected “hundreds of millions” of dollars, a sum that includes money donated to legitimate charities that help feed and clothe an estimated 2.1 million refugees. The proportion that goes to support radical Islamist groups is deliberately obscured by organizers who are adept at using social media such as Twitter and Facebook to communicate with potential donors and the rebel groups they support, the official said.

“Social media enables fundraisers to solicit donations from supporters in countries — notably Saudi Arabia — which have otherwise banned unauthorized fundraising campaigns for Syria,” said the senior U.S. official, who spoke on the condition of anonymity to discuss intelligence assessments. He said some groups hold regular cash-collecting events at private homes and mosques, while others specialize in wire transfers that use informal Arab banking houses known as hawala.

Western officials closely followed the skyrocketing prominence of formerly unknown Kuwaiti clerics such as Sheik Hajjaj al-Ajmi, whose Twitter appeals for money for the rebels this year became so effective that a Syrian brigade adopted Ajmi’s name.

But more recently, some of the fundraising networks have sought to reshape the conflict in deeper ways, creating their own militia movements while spreading money broadly to expand their influence among dozens of Islamist rebel groups, said William McCants, a former State Department adviser .

“They are like militia-group venture capitalists,” said McCants, director of the Brookings Institution’s Project on U.S. Relations with the Islamic World. “They are trying to pick winners, seeing which groups are growing and performing well. And they have a lot of money and no real restrictions.”

The Ummah Conference’s headlong dive into the Syrian conflict started with fundraising but quickly extended to the battlefield.

For this 12-year-old Islamist organization, which was founded in Kuwait and boasts chapters in a dozen countries, the Syrian conflict has served as a recruiting tool, idea laboratory and training academy, say U.S. and Middle Eastern analysts who have studied it. The group’s leaders have formed ties with a Syrian group of the same name — the Liwaa al-Ummah, or Ummah Brigade — while showering money on Islamist groups such as Ahrar al-Sham. Ummah Brigade fighters coordinate tactics with more radical groups such as the al-Qaeda-linked Jabhat al-Nusra and the Islamic State of Iraq and the Levant.

The group’s ties to the conflict deepened in March when one of its leaders — Mohammad al-Abduli, a former United Arab Emirates army colonel and president of the conference’s UAE branch — was killed by a sniper while fighting in Syria. The organization has since established a military training camp in Syria named in his honor.

A video posted in May depicted two of the Ummah Conference’s regional officials — Saudi branch leader Mohammad Saad ­al-Mufrih and the new UAE leader, Hassan al-Diqqi — surrounding by gun-toting graduates of the newly opened Abduli Training Camp. Mufrih, the Saudi, appealed in the video for Muslims to aid the Syrian rebels “by any possible instrument, with money and with men.”

“There is no excuse for anyone,” he said.

Such rhetoric is not uncommon, but the group’s increasing involvement in the conflict has become a source of worry for Middle Eastern governments and Western officials. Some see the Ummah Conference transforming itself into a version of the Muslim Brotherhood, which has been tarnished by defeats in Egypt and perceived irrelevance in Syria.

Unlike the Brotherhood, the Ummah Conference’s leaders have shown little inclination to achieve their goals through long political struggles for domestic office, analysts say. While avowedly opposed to terrorism, the group in its charter denies the legitimacy of secular governments in Muslim countries and calls for the “Islamatization of all laws and legislation.” The movement’s Kuwaiti founder, Hakim al-Mutairi, recently praised former al-Qaeda leader Osama bin Laden as “the lion of Islam” and “an international Muslim leader” whose heroism will be properly celebrated once all Muslims are freed from secular rule.

Moreover, Diqqi, leader of the UAE chapter and a veteran of the Syrian conflict, has suggested that Islam’s true enemies lie outside the Middle East. He denounced the United States in a 2002 book as one of the two “most dangerous countries” in the world, the other being Russia. In a Twitter post in June, he described the Syrian conflict as an important step toward empowering Muslims to challenge U.S. influence in the region.

“The Muslim people will not be able to confront American terrorism without adopting a comprehensive strategy where politics and jihad intersect,” he wrote.

To current and former U.S. counterterrorism officials, such pronouncements have a distressingly familiar ring, inviting comparisons to the 1970s and 1980s, when radical Islamists throughout the Middle East rallied to the cause of Afghan Muslims waging jihad against the Soviet Union.

“Some of these groups have always held radical views, but before the Arab Spring, they had no active jihad, but only aspirations,” said one former U.S. intelligence analyst who worked extensively in the region. “Now they have a jihad. Now they are veterans.”