Obama open to meeting with new Iranian leader at UN 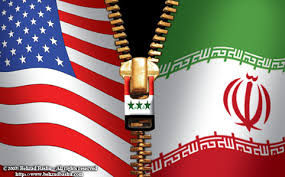 The biggest moment at next week’s meeting of the United Nations General Assembly could be a handshake that may or may not happen.

As world leaders prepare to descend on New York for the annual meeting of the world body, all eyes are on what interaction, if any, President Obama and the newly installed Iranian President Hasan Rouhani have at the UNGA.

No U.S. president has met a top Iranian leader since Islamic radicals overthrew the pro-American Shah Mohammad Reza Pahlavi more than 34 years ago. But the two leaders have sent signals in the lead-up to next week’s meeting of the world body that they are open to taking at least small steps toward opening a diplomatic relationship.

The White House says there is no scheduled meeting between Obama and Rouhani, but White House press secretary Jay Carney also underscored on Thursday that Obama “has been open as a general proposition to bilateral discussions with the Iranians” while noting that the president has found Rouhani’s rhetoric in his first weeks in office encouraging.

The two leaders have confirmed that they’ve exchanged letters since Rouhani has taken office. In an interview this week with the Spanish-language network Telemundo, Obama said he indicated his interest in seeing Iran address U.S. concerns about Iran’s nuclear program” in a way that would allow Iran to rejoin the international community.”

Meanwhile, Rouhani, who denies that Iran is seeking nuclear weapons, told NBC News earlier this week that he received a “positive and constructive” letter from Obama after the recent Iranian election, and it could augur “subtle and tiny steps for a very important future.” Rouhani also asserted in the interview that he has complete authority to negotiate with the United States on its nuclear program.

The new Iranian effort also comes with the backdrop of the Syria crisis. In making his case for military action against Syria in recent weeks, Obama has repeatedly raised the point that not taking action would have sent the wrong message to Iran, which also happens to be one of Syrian President Bashar Assad’s chief allies.

But what has been largely lost in the political debate over Syria in Washington is that Tehran will have to play a role for a political solution to end the bloody civil war that has left more than 100,000 dead.

“Iran needs to be part of the diplomatic mix to make it work,” said John Tirman, the executive director of the Massachusetts Institute of Technology’s center for international studies. “It’s sort of lost in translation to political elites of this country.”

For Rouhani, who took office in August and campaigned as a moderate, this is his first big moment on the international stage.

He’s only been in office for several weeks, and analysts say that Iran’s clerical hierarchy have him on a relatively short leash to show that a softer tact with the West will lead to something — particularly some easing of crippling punitive sanctions that the United States and allies have levied against Iran for its suspected nuclear ambitions.

“Rouhani knows very well that there is a specific degree of flexibility that he has right now that he won’t have six months from now unless he’s capable of achieving a few successes diplomatically — particularly important are successes that have a direct impact on the very dire state of the economy,” said Trita Parsi, president of the National Iranian American Council and the author of a book detailing diplomatic efforts with Iran, A Single Roll of the Dice.

In his first weeks in office, Rouhani has made some notable moves as part of his charm effort to signal to the West the political space he has.

Rouhani and his U.S.-educated foreign minister, Mohammad Javad Zarif, tweeted greetings to Jews on the Jewish New Year. Zarif also said in a Facebook exchange with the daughter of House Minority Leader Nancy Pelosi that Iran never denied the Holocaust.

“The man who was perceived to be denying it, Ahmadinejad, is now gone,” wrote Zarif, referring to the previous bellicose Iranian President Mahmoud Ahmadinejad, who repeatedly made derogatory and offensive comments about Jews during his time in power.

On Wednesday, Iranian authorities announced they were freeing 11 of Iran’s most prominent political prisoners, what was seen widely as an olive branch to the West ahead of Rouhani’s first trip to the United States as president. The White House welcomed the release on Thursday as “concrete” action.

“This is the least costly political measure that he could take that at the same time would show the world that he has the ability to deliver without giving anything of particular substance to the West,” Parsi noted.