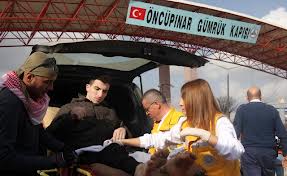 Al Qaeda-linked fighters battled a rival Syrian rebel group near the Turkish frontier for a second day on Thursday, after the militant Islamists stormed a nearby town and prompted Turkey to shut a border crossing.

The fighters from the Islamic State of Iraq and the Levant (ISIL) on Wednesday killed at least five members of the Northern Storm Brigade, a rebel group that controls the border, highlighting Syria’s deep opposition divisions.

The confrontation in the town of Azaz was one of the most serious clashes between the al Qaeda affiliate, made up largely of foreign fighters, and the more ideologically moderate home-grown rebels trying to topple President Bashar al-Assad.

Their struggle, however, is less about ideology and more about a fight for territory, resources and the spoils of war. ISIL fighters had positioned themselves to defend the town while a nearby rebel brigade tried to broker a ceasefire.

A Turkish official told Reuters the Oncupinar border gate – about 5 km (3 miles) from Azaz and opposite the Syrian Bab al-Salameh gate – had been closed for “security reasons”.

“There is still confusion about what is happening on the Syrian side. All humanitarian assistance that normally goes through the gate has ceased,” said the official, speaking on condition of anonymity.

Crossings such as Azaz have been a lifeline for rebel-held territories in Syria’s north, allowing in humanitarian aid, building materials and food as well as giving refugees a route out of Syria.

The crossing fell into opposition hands last year when rebels launched an offensive to take the northern business hub of Aleppo.

An activist from Azaz who identified himself as Mohamed al-Azizi said fighting flared up again in the border area on Thursday when Northern Storm members moved to retake a checkpoint from ISIL fighters about 2 km from the frontier.

“There are very heavy clashes happening now,” he said, citing a rebel commander. He did not have details about the number of any wounded or dead.

Northern Storm fighters moved to the border crossing, joined by fighters from the powerful Tawheed Brigade who came from Aleppo to try to broker a truce. Tawheed has a large presence in Aleppo, Syria’s largest city, about 30 km south of Azaz.

“Reinforcements from the Tawheed Brigade were sent to impose a ceasefire on the two sides,” said Abu Obeida, a Tawheed spokesman. “There is still no ceasefire yet … There are negotiations under way.”

The clashes were a stark illustration of the relative strength of the al Qaeda-linked fighters compared to Syria’s larger but less experienced moderate forces. It also highlights the divisions that have plagued the opposition.

Both dilemmas have left Western powers hesitant to supply the rebels with the advanced weapons they need to counter Assad’s better-equipped army.

ISIL declared an offensive last week against two other rebel factions, accusing them of attacking its forces and suggesting they may have collaborated with the government.

“What is worrying are the clashes themselves,” a second Turkish official said, referring to rebel infighting generally.

“What we want is to see the various coalition groups put their house in order and focus on the struggle with the regime, because that is the real issue – the violence inflicted by the regime on the Syrian people.”

Ankara has been one of the strongest backers of the rebels in the 2-1/2-year uprising against Assad. While it denies arming them, fighters including militant Islamists have been able to cross its border into Syria.

At the same time, many activists and Kurdish forces accuse Turkey of allowing radical groups to go through its territory to launch attacks on its other foe – Kurdish militias, who are now operating on the frontier in northeastern Syria. Turkey denies those charges.