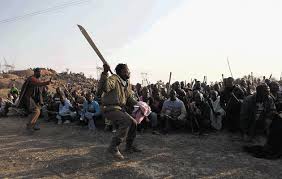 South African police lied about the Marikana shootings last year, in which 34 striking miners were killed, a commission of inquiry has said.

Police falsified or withheld documents, and gave false accounts of events, it said.

The police shooting of the miners at the Lonmin-owned platinum mine in August 2012 shocked the nation.

The police said they were acting in self-defence, days after two officers had been hacked to death by protesters.

The commission was appointed by President Jacob Zuma to investigate the deaths of the 34 miners – the most deadly police action since the end of white minority rule in 1994.

At issue right now, is not so much what happened at Marikana last year, as the way the police have presented their version of events to the inquiry, says BBC Africa correspondent Andrew Harding.

To put it crudely – as with former US President Nixon’s Watergate scandal – it’s not the crime, it’s the cover-up, our correspondent says.

“We have obtained documents which in our opinion demonstrate that the [police] version of the events at Marikana… is in material respects not the truth,” the commission said.

It said the material which had come to light had “serious consequences” for its future work.

The hearing was adjourned until Wednesday, while the commission reviewed the “thousands of pages” of documents, and sought to obtain access to additional hard drives and electronic records.

Our correspondent says that the commission is clearly so outraged by what has already been uncovered that it has taken the extraordinary step of calling the police liars and forgers, and implicitly questioning whether the Marikana inquiry – beset by delays and funding controversies – can continue.

The inquiry has been delayed several times over the question of who should pay the legal fees for hundreds of injured and arrested miners. The new information may jeopardise its October deadline.

Demonstrations were held in Pretoria last week over the government’s refusal to pay legal fees for miners appearing at the inquiry.

In the immediate aftermath of the police killings, the authorities sought to portray the miners, who were striking illegally, as responsible for the bloodshed.

Some 270 of the striking miners were arrested and charged with murder, though the charges were later provisionally dropped.

The government has been criticised for its handling of the crisis, and some of the Marikana miners remain angry that not a single policeman has yet been arrested over the shootings.