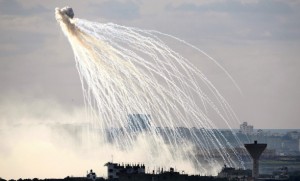 The U.S.-Russian plan to dismantle Syria’s chemical weapons is drawing attention to Israel’s own suspected chemical stockpile and could raise pressure on the Jewish state to come clean about its capabilities.

Israel signed the landmark international treaty banning the production or use of chemical weapons two decades ago, but it is among a handful of nations that have never ratified the deal. While foreign experts widely believe that Israel likely possesses a stockpile of chemical and biological weapons, Israeli officials refuse to confirm or deny the existence of any such arsenal.

They say the key issue right now is Syria, not Israel.

In a radio interview Monday, former Defense Minister Amir Peretz declined to discuss the country’s chemical weapons capabilities but said the international community’s attitude toward Israel is “different” from Syria.

“It’s clear to everyone that (Israel) is a democratic, responsible regime,” he told Israel Radio. “I very much hope and am certain that the international community will not make this a central question and we will maintain the status quo.”

Israel has been similarly vague about foreign reports of a nuclear arsenal, a policy of ambiguity aimed at deterring its enemies. But following the weekend deal between the U.S. and Russia to eliminate Syria’s chemical weapons by mid-2014, voices have emerged calling on the government to take similar steps.

“I do believe that the Israeli government should be open about this issue, should say what arsenal, if any, it does have and should strive for an international agreement to keep all these kinds of weapons outside of the Middle East,” said opposition lawmaker Dov Khenin.

The liberal daily Haaretz wrote in an editorial Monday that the chemical disarmament of Syria gives Israel an opportunity to finally ratify the Chemical Weapons Convention.

“It would be a pity if in the future Israel finds itself in the position of Syria — forced to sign the convention under international pressure,” the newspaper said.

Paul Hirschson, a spokesman for the Israeli Foreign Ministry, said Israel could not ratify the treaty in such an uncertain environment. “These things are regional and we’re not going to go out there on our own,” he said.

There seems to be a consensus among foreign experts that Israel has likely developed an arsenal of chemical and biological weapons over the years.

“Israel’s lack of transparency has led to a continued suspicion that a chemical weapons program is in place, although we are unable to confirm this or provide any further details,” Emily Chorley, a chemical weapons analyst at IHS Jane’s, said in an email.

In a report this month, Foreign Policy magazine published what it said was a secret 1983 CIA document outlining evidence that Israel possessed a chemical weapons stockpile of unknown size, likely developed in the 1970s out of fear its neighbors were acquiring such weapons.

“Several indicators lead us to believe that they have available to them at least persistent and nonpersistent nerve agents, a mustard agent, and several riot-control agents, matched with suitable delivery systems,” the document says.

The article’s author, military historian Matthew M. Aid, said the nonpersistent agent was almost certainly sarin, the same chemical that the Syrian army is suspected of using in an Aug. 21 attack that allegedly killed more than 1,400 civilians and triggered the international response. It was unclear what the persistent nerve agent might be.

Chemicals are labeled persistent and nonpersistent depending on how long they last.

The document said Israel had possessed special testing equipment since the early 1970s and “possible tests were detected in January 1976.” It also said a “probable CW nerve agent production facility and a storage facility” were identified in 1982 in the southern Israeli town of Dimona, home to Israel’s secretive nuclear program. It said other weapons production capability was believed to exist in Israel’s chemical industry.

If Israel does have an active chemical weapons program, it likely involves the Israel Institute for Biological Research, a secretive facility in the Tel Aviv suburb of Nes Ziona that is under the jurisdiction of the prime minister’s office. The facility’s website describes itself as a “governmental, applied research institute specializing in the fields of biology, medicinal chemistry and environmental sciences.” Prime Minister Benjamin Netanyahu’s office declined comment.

Israel says it has never used chemical weapons on the battlefield, though in one famous incident, Israeli agents attempted to assassinate Hamas leader Khaled Mashaal by poisoning him in neighboring Jordan. The agents were captured, however, and Israel was forced to turn over the antidote.

Israel has also drawn war crimes accusations for its use of white phosphorous during an offensive in the Gaza Strip in early 2009. White phosphorous can be used legally as an illuminating agent, but is forbidden from use as a weapon. The substance can be dangerous if used in civilian areas because it can cause severe burns. Earlier this year, the Israeli military said it was halting its use of the material.

The use of chemical weapons is an emotional topic in Israel, where memories remain fresh of the Holocaust, when countless numbers of Jews were killed in Nazi gas chambers.

Since the outbreak of the civil war in neighboring Syria two and a half years ago, Israel has repeatedly warned of the dangers of Syria’s chemical arsenal. Israeli leaders fear that Syrian nonconventional weapons could either be fired into Israel, or slip into the hands of Hezbollah and other hostile groups battling inside Syria.

Hirschson said attempts by Syria or any other country to link Israeli compliance with Syria’s were disingenuous efforts to divert attention away from the real issue.

“I don’t think Syria is in any position to tell anyone what to do,” he said. “We have never threatened anybody with chemical weapons, never used them, and they have.”

Photo: Israel reportedly used depleted uranium, white phosphorus and other toxic metals in its war on the people of the Gaza Strip