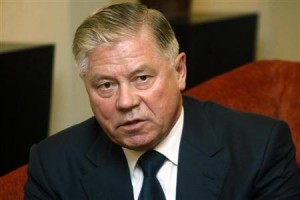 Russia’s Supreme Court chairman Vyacheslav Lebedev was in intensive care but in a stable condition in Ghana’s capital after being involved in a car accident on Monday, officials said on Tuesday.

Lebedev was returning to Accra after speaking at a Ghana Bar Association conference in the town of Ho, southeast Ghana, when a truck veered into the lane in which his convoy was travelling, a Ghana Ministry of Information statement said.

Lebedev was airlifted by helicopter to hospital along with a police officer who was also injured, Deputy Superintendent of Police Alexander Obeng said by telephone. He described Lebedev’s injuries as minor.

A Russian embassy official confirmed the accident and said arrangements for his care had been made.