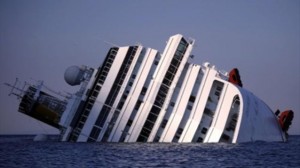 A complex system of pulleys and counterweights on Monday began pulling the Costa Concordia cruise ship upright from its side on a Tuscan reef at Giglio Island, where it capsized 20 months ago — an anxiously awaited operation of a kind that has never been attempted on such a huge liner.

Engineers told reporters they’d succeeded in detaching the 952-foot-long vessel from the reef on which it was resting, and the operation was continuing. No bodies had been spotted, they said.

The delay was due to an early morning storm that pushed back a floating command room center from its position close to the wreckage.

The goal is to raise it from its side by 65 degrees to vertical, as a ship would normally be, for eventual towing.

The operation, known in nautical parlance as parbuckling, is a proven method to raise capsized vessels.

Rolling the ship off the seabed and onto huge underwater platforms was expected to take eight to ten hours.

The Costa Concordia is around two-and-a-half times the size of the Titanic, and no one wants to see it split apart, reports CBS News’ Sabina Castelfranco.

Few of the locals will ever forget the night of January 13, 2012, when the Costa Concordia struck rocks. There was a mad rush to provide assistance to the thousands fleeing the ship. The harsh reality that 32 people lost their lives in the disaster still haunts many of them.

Two bodies are still missing, and their families are hopeful they will now be found.

Since the tragedy, the people of Giglio have watched their island’s port transform itself into a work-in-progress area for an unprecedented salvage operation. A 500-member international team of engineers and mechanics has worked tirelessly for months with one goal in mind: removing the 114,500-ton ship firmly stuck to two outcrops of rock on the seabed.

But it’s a hugely complex operation and not one that is without risks. It is those risks that most concern the locals at this time.

They have been assured that all calculations have been made and nothing has been left to chance, but these islanders are concerned. Everyone is aware there are still 237.5 cubic meters of polluted water inside the ship, which could cause significant environmental damage to Giglio’s pristine waters.

Additional emergency vehicles have arrived on the island, and as extra precaution, inflatable pollution barriers and fishing nets have been put up around the wreck and along the shoreline, in an effort to hold back any debris or oil that will spew from the Concordia as she turns.

The green light was given to its rotation after it became clear the ship could not remain in its current position another winter.

Nick Sloane, the South African senior salvage master of the operation and project leader for contractors Titan Salvage, said the Concordia would suffer an extreme amount of force of compression in the first moments of the maneuver. But he expressed confidence that the huge cruise ship will survive the stress. And it did.

With the eyes of the world focused on Giglio, Sloane — who has three decades of experience — candidly admits this is an extraordinary project which has pooled together the very best engineers and expertise from around the world.

“The size of the ship and her location make this the most challenging operation I’ve ever been involved in,” he said.

As the operation continued, twelve experts were in the control room positioned at the bow of the ship, anxiously staring at their computer screens and listening for every noise the wreck made.

At a rate of three meters per hours, dozens of crank-like pulleys were to start slowly rotating the ship. Steel chains weighing 17,000 tons have been looped under the vessel to help hold it together and pull it upright. Also, tanks, known as sponsons, will be filled with water on the port (exposed) side to help rotate it upward.

A massive grouting mattress has been created on the seabed between the two outcrops of rock to provide greater stability to the ship.

“The objective is to get her to move very slowly and gently,” Sloane said.

Once the ship moves upward about 25 degrees, “at that point gravity takes over, and there is no going back.”

Parbuckling is a tested way to set upright capsized vessels, but never before has this operation been carried out on a cruise liner the size of the Costa Concordia.

Once the ship is pulled upright, an in-depth survey will be carried out to establish the extent of the damage on the starboard side.

The re-floating of the Concordia is not expected before the spring of 2014. Then, it will need to be towed to the mainland. But its final port of destination — where it will be cut up for scrap — is still to be decided.