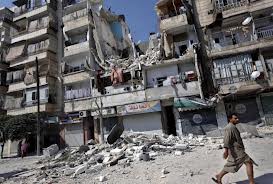 A ban on chemical weapons isn’t enough; the international community should also demand that the Syrian regime end its use of air power over populated areas, an opposition group said Sunday.

“The Syrian National Coalition insists that the ban of use of chemical weapons, which led to the loss of lives of more than 1,400 Syrian civilians, must be extended to ban the use of the regime air power and ballistic weapons against population centers, in addition to the redeployment of heavy weapons away from population centers, and the prohibition of use of these weapons to bomb Syrian cities and villages,” the group said in a statement.

“The world must not allow the Assad regime to take advantage of the Russian initiative and their joining the treaty on the prohibition of the use of chemical weapons as an excuse to continue the daily slaughter of the Syrian people with impunity,” it added.

On Saturday, after three days of talks, Russia and the United States reached a groundbreaking deal on a framework to eliminate Syria’s chemical weapons.China said Sunday it welcomed the deal.

“We believe this framework agreement has cooled the tense situation in Syria and has opened a new opportunity to use a peaceful mean to resolve the chemical weapons issue,” Chinese Foreign Minister Wang Yi said after a meeting with visiting French Foreign Minister Laurent Fabius.

It was the first official reaction from China.

China, like Russia, is a Syrian ally. Like Russia, it has veto power in the U.N. Security Council.

What the deal says

Secretary of State John Kerry and Russian Foreign Minister Sergey Lavrov stood side by side in Geneva as they set out a series of steps the Syrian government must follow.

Syria must submit a comprehensive list of its chemical weapons stockpile within one week, Kerry said, and international inspectors must be on the ground no later than November.

Syrian Prime Minister Wael Nader al-Halqi welcomed the deal, saying his country is bent on implementing the political program as the “sole exit” from the crisis, according to the state-run Syrian Arab News Agency.

The verification and destruction process will be carried out by personnel from both the United Nations and the Organisation for the Prohibition of Chemical Weapons, the body that implements the international ban on chemical weapons use, according to the framework agreement.

Russia and the United States will now work to get a U.N. Security Council resolution that will keep the process under review and allow the Council to consider the use of force if Syria fails to comply.

The United States and its allies blame al-Assad’s forces for the chemical weapons attack outside Syria’s capital last month that Washington says killed more than 1,400 people.

Al-Assad and other officials vehemently deny their forces were responsible.

U.N. Secretary-General Ban Ki-moon said Friday his team is preparing a report for the Security Council that he believes will be an “overwhelming report that chemical weapons were used.” The report is expected to be delivered Monday morning, according to three diplomatic sources.

The Syrian opposition struck a note of skepticism.

Gen. Salim Idriss, head of the rebel Free Syrian Army, told reporters in Istanbul he has information that Syria already started to move chemical materials and weapons out of the country, into Lebanon and Iraq.

“We confirm that Iraq is against possessing such weapons and other weapons of mass destruction anywhere in the world and under any excuse,” said a statement Sunday from the Iraqi prime minister’s office.

On Sunday, the Syrian National Coalition also expressed its doubts.

“The Assad regime has a long track record of deceit when it comes to dealing with the treaties and empty promises in the regime attempt to buy more time,” it said in a statement.

It then asked rebel supporters to strengthen its military capabilities.

“The Coalition calls upon the Arab brothers and Friends of Syria military to strengthen the arm capability of the military opposition to be able to neutralize the Assad air force and his tanks to force the regime to end its military campaign and accept a political solution that will lead to a democratic transition in Syria,” it said.