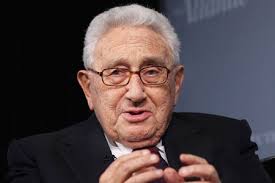 Former U.S. Secretary of State Henry Kissinger told CNN’s Christiane Amanpour on Monday that, despite some reticence, he now supports a limited military intervention in Syria.

“I have been against American military intervention, and have said so publicly,” Kissinger told Amanpour in New York. “This, however, is a case of use of weapons of mass destruction, which has consequences beyond Syria. … For that reason, and for the limited purpose of penalizing the use of weapons of mass destruction, I support President Obama’s request.”

Kissinger said that as much as he can, he has urged congress to authorize the U.S. president’s request to use force.

“It would have been a lot better if this had had a formal vote at the UN,” Kissinger said. “But in the last resort, and if the issue is important enough, the United States may have to act – really for the sake of everybody.”

“We can’t be the world’s policeman,” he told Amanpour, “but we can be the world’s last resort.”Former U.S. Secretary of State Henry Kissinger told CNN’s Christiane Amanpour

Despite his support for an American intervention, Kissinger said he was worried by President Obama’s surprise decision to take his proposal before congress, instead of action without its consent, as the president did in Libya (albeit with UN Security Council support).

“I think it was unwise to put it before the congress,” Kissinger said. “It creates the impression … that the president really doesn’t have the authority to act unless he has congress, and that therefore there’s substantial delay which the congress deliberates.”

President Obama himself, when announcing his intention to take his proposal to congress, acknowledged that he has the authority to act without congressional support, but said that he believed an intervention would be “stronger” and more “effective” with congress’ support.

But Kissinger warned that the very realistic alternative, that President Obama is denied his request for congressional authorization, would set a grave precedent.

It would “be dangerous for the world if the president of the United States were repudiated on a matter that he considers of the importance of the campaign he has now put forth,” he said.

President Obama is seeking to act unilaterally, without UN Security Council support, partly because of the support given to President Assad by Russia – a country with which Kissinger had much experience as a long-serving secretary of state during the Cold War.

“Putin is a man who wants to restore Russia to some respect,” Kissinger said. “But he comes from a country that has a tradition of flexing its muscles. So sometimes the conduct is confrontational.”

Despite being bitter enemies during the Cold War, the United States and the Soviet Union were able to develop a kind of détente – a détente that seems to be lacking even now.

“In the end, we and Russia can develop common objectives because where we clash are issues like Syria, where I believe we both should have the same objective,” Kissinger said, “which is the radicalization of the Arab world. Because a radical Arab world will spread over into Russia before it spills over into us.”