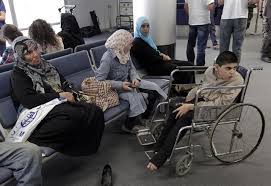 107 refugees left Lebanon Wednesday to Germany as part of a temporary resettlement program. They gathered at the International Organization for Migration offices in the Beirut southern suburb of Jnah Wednesday morning and boarded three buses set to take them to Beirut’s international airport.

Thirty men, 40 women, 34 children and three infants, all selected by the United Nations High Commissioner for Refugees, and approved by the German government, are part of a group of 5,000 vulnerable refugees who have been selected for a temporary two-year stay in Germany.

Here is the press release issued by United Nations High Commissioner for Refugees ( UNHCR) in this regard.

UNHCR has announced that 107 highly vulnerable Syrian refugees will leave Lebanon on Wednesday under a temporary Humanitarian Admissions Programme announced by Germany in March this year.

Melissa Fleming, UNHCR Chief Spokesperson UNHCR told reporters in Geneva that the group, which is headed for Hannover, is the first to be assisted by UNHCR in this process.

Giving more details, she said that on arrival the refugees will be transferred to an accommodation centre in Friedland in Lower Saxony and they will stay there for fourteen days. They will be offered cultural orientation courses – basic language training and basic information on Germany, including the school and health systems, as well as help in interacting with the local authorities.

She explained that at the end of the two week period, the refugees will leave for locations across Germany and will be accommodated in small centres or apartments and will have full access to medical, educational and other social services.

The residence permit issued for them is for two years, with the option to extend if the situation in Syria remains unchanged and during their stay the refugees will have the right to work, she added.

Germany’s Humanitarian Assistance Programme provides for up to 5,000 places for Syrian refugees, and as such is the biggest relocation programme currently in existence for the Syria crisis, Fleming noted, adding that UNHCR teams in the Syria region are currently preparing additional referrals for this programme, which is expected to be fully subscribed by the end of 2013.

“Resettlement of refugees, whether formal resettlement or expedited relocation – as is the case with Germany’s Humanitarian Admissions Programme – is a vital and potentially life-saving tool for helping particularly vulnerable refugees. Those resettled may be women and girls at risk, people with serious medical conditions, survivors of torture or others with special needs” Fleming told reporters in Geneva.

Under the UNHCR 2013 Syria Regional Response Plan, Germany and Austria have committed places for humanitarian admission (5,000 and 500 respectively) – whereas Australia, Canada, Denmark, Finland, the Netherlands, New Zealand, Norway, Spain, Sweden, and Switzerland have pledged more than 1,650 resettlement places, 960 of which are for 2013, said Fleming.

She added that the United States of America has indicated that it is willing to consider an additional unspecified number of cases.

She noted that “because of the growing size of the Syria refugee population in countries neighbouring Syria, we hope to see countries offering places outside their current annual quotas and allowing for expedited processing. This would help meet the needs of highly vulnerable Syrians, and it would ensure that resettlement opportunities remain available for highly vulnerable refugees from other countries”.